This would relate to our earlier posts about all the little prince and princes in our society.
My little boy, a first grader, has a dance medal.  Does he know how to dance?  Not really.  Has he ever been in a dance competition?  No.  Has he ever taken dancing classes?   No.
So why does he have a dancing award?
Well that brings us to an blog interview with the author, Joel Best,  of Everyone's a Winner:  life in our congratulatory Times.

I like to tell people my book is about kindergarten soccer trophies. At the end of the season, each player on the team receives a trophy, so that by the time they reach third grade, lots of kids can cover the top of their dressers with awards for participating in sports. Of course, this is just the foot in the trophy-case door. We live in a an era of status affluence, in a congratulatory culture that must distribute tens–probably hundreds–of millions of awards, prizes, and honors each year.
My book seeks to explore the process of prize proliferation. It turns out that everyone favors more prizes, not just those liberals who insist that giving recognition to the disadvantaged can help build self esteem, but also those conservatives who argue that honoring excellence will foster better character. The result is a status cycle: giving more prizes to the hoi polloi justifies new honors to distinguish the elite; while honoring the elite leads to calls for more awards for ordinary folk

So how did he get his dance medal?  The little girl next door, goes to dance glass, and every session (I think they are quarterly) she gets a medal.  She has been at this for a little while, and thus has a number of medals.   Understanding intrinsically the value of gift giving, and having no use for and having done nothing beyond showing up to earn them, she gives them away.  There are dance medals scattered about our neighborhood.
Of course my son also has one of these: 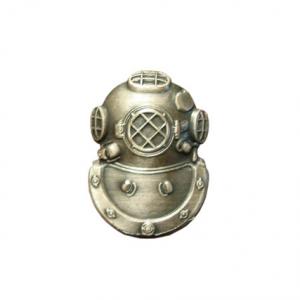 But someone had to earn that one, and my son got it because someone really liked him.  This someone had a handmade craft paper U.S. Flag that my son made on his wall for a long time.
It does not take much imagination to guess which "medal"  my son keeps locked up in his safe.
.
Posted by russell1200 at 9:40 AM

A very good point. The "everyone is a winner" seems to be an extension of the femi-PCness we are constantly bombarded with.

I have been discussing the current high levels of narcissism in our culture, with the younger generation actually being worse then their baby boomer parents - a little frightening.

The "everyone is a winner" is probably more a concurrent symptom than a cause, but it is all tied together in some some form.

If you use the "search" box and enter "narcissism" you will see what I mean.

What is worse is that I have at least one other post started on the subject I have not gotten around to even publishing. I thought I would let the dead horse rest for a few moments before I started hitting it again.