The Wind Up Girl: A Review

Paolo Bacigalupi hit paydirt with his first published novel, The Windup Girl.  Described as a biopunk science fiction novel,  it is something of a slow-crash everything-but- the-kitchen-sink apocalypse with a heavy emphasis on peak oil, and the dangers of biotechnology (and big-Ag) run amuck.  It is set in the 23rd century, but the collapse has been so severe that the technology is understandable and relevant to our own perspective. 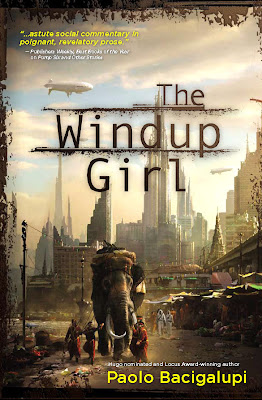 The Windup Girl is a great post-apocalyptic novel about a world where genetic manipulation has backfired into plagues that have almost wiped out the human race and much of the natural world. Bacigalupi has painstakingly created a vocabulary for this culture with words that sound realistic and technical like Sibiscosis, ivory beetle, gene-rippers, kink-spring and so-on. This adds a rich texture to the story that makes you feel like you're there. The characters are multi-layered. Heroes become villains. Villains become heroes. He does a very good job and giving each character distinctive qualities that go beyond looks and mannerisms--we feel their motivations. Having heard the book, I now want to read it so that I can see the spellings of the names and the terms. Overall a great companion to other books in the genre. If you like Dune, Oryx and Crake, and 1984, you will likely love this book.

N: Thank you for stopping by.

If you like Dune, Oryx and Crake, AND 1984? That sounds like the mix of an older audience.

It struck me as being geared more to the younger version of the cyber punk crowd.

The plague you reference are intentional and mostly directed at food crops. With the primary culprets being Agro-business.