Paolo Bacigalupi's Ship Breaker is a National Book Award Finalist young adult (YA) novel set in the same world as the award winning Wind Up Girl. 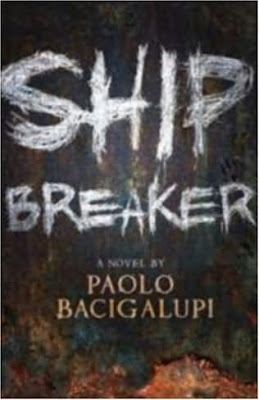 We covered Mr. Bacigalupi's background when we did his Wind Up Girl earlier.
Novels of dystopian futures are very popular YA novels. What primarily distinguishes them from the adult fare is that the main protaganist is generally a teenager right at the edge of adulthood, and if their is sexuality at all, it is greatly toned down. Violence does not seem to be disallowed. So the only sexuality here is a light kiss, but people can get mangled up in machinary. You can also threaten to sell peoples body parts to body banks.
The novel follows tha activity of a ship breaker. If you may recall, I had a posting that dealt with actual shipbreakers in India [see bottom of that post]. I would be stunned if Mr. Bacigalupi was not familiar with the Atlantic article: although he does not mention it in the acknowledgements.
The novel starts on the Gulf Coast that has been flooded from global warming and pounded by Catagory 6 ship killer hurricanes. The story is told from the point of view of Nailer, a physically small young lad of maybe 14 years of age: he is not sure himself how old he is. His small size is to his advantage because he is a ship breaker.
Ship breakers in real life, and in this novel, slowly tear out the materials from old ships to salvadge its scrap value. It is dirty, dangerious work. Today it is done in places like Pakistan, and India. In this future world that has run out of oil they do it on the nearly deserted beaches of the Gulf Coast. Nailer is small for his age, which allows him to creep through the old duct work and wire channels of the old ship, stripping them out for their materials.
Reasonably quickly, Nailer gets involved in a number of adentures that bring him into contact with both the bioengineered halfmen, with dog-like heads but a goodly proportion of Tiger and Hyena genes as well, and the wealthy- the swanks.
There is a fair bit of moralizing about the relative lot of the rich and poor. Do the rich deserve their riches, etc. It does not dominate the book, but it fails to answer how you can treat everyone in a fair manner, without also breaking up the accumulated wealth of generations. Since most wealth historically was accumlated over a lengthy period of time, with a very slow rate of wealth generation, it is not clear how you are going to get any wealth generated in a zero or declining growth society, if you keep evening out its distribution.
Today we get around this by the fact that we have been living in an astonishing society that has been able to average a compounding growth of 3%. Prior to the industrial revolution, your typical growth was more around 1/10th of one-percent, and it was likely the opening up trade and colonialism in North America that kick started enough personal wealth to allow the capital and demand needed to get the first textile mills running.
So today we can hive off a portion of this growth away from accumulation toward more even distribution. Within bounds this has the positive effect of increasing participations, and allowing more people enough means to be economically productive. But in a very-low-growth, or zero-growth or no-growth world, if you start slicing off the wealth, you are almost immediately cutting into the bone: principal is destroyed. When you destroy the principal that generates your production, you start to get poorer: everyone does.
So in net, while I sympathetic with the plight of the today's and tomorrow's ship breakers, other than aleviating some of the brutalities of their life, I am at a loss as how you change their fate in a collapsed society.
There is also a discussion, with the very cool half-man, named Tool, about genetics not being destiny. Although the half-men are bred to be loyal to one master, Tool has broken free, and serves only himself. I think these discussions are fairly well thought out, and within the context of a YA novel, appropriate.


The novel is much more of an action-adventure yarn than The Wind Up Girl.  It is not as ground breaking, but it is not as frightening and bleak either.  The novel is far enough past the collapse that I would not put it in the cozy catastrophe catagory, but it certainly is a feel good adventure.
Posted by russell1200 at 5:00 AM