A paper over at Voxeu illustrates the continued weak position of people trying to find work.  This weakness is true even in relation to earlier downturns.

The author suggests changes in management behavior and labor bargaining power.  I don’t have a particular problem with these points, but in my mind they answer more questions than they answer.  He notes that since the 1970s the unions have been weaker, a lower real dollar minimum wage, competition from imports, and competition from low-skilled immigrants.

This all sounds an awful lot like wage arbitration, and to be more specific, wage arbitrations caused by a globally networked economy.  American labor is competing with countries where labor is much cheaper relative to the goods produced than here.

I would add to this, technology improvements that allow more work to be done by less people, and currency manipulation by many of the big exporting countries. 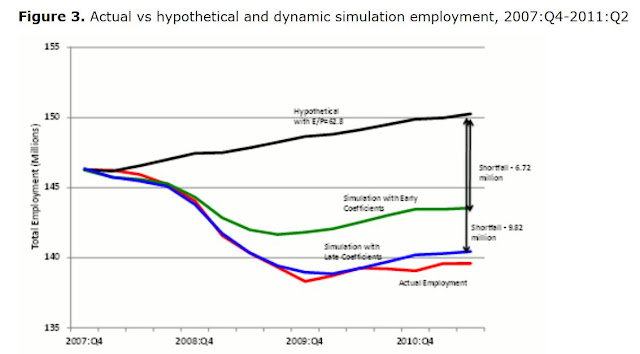 
Thus labor’s weakened bargaining situation with changes in management behavior toward greater emphasis on cost-cutting in recessions accounts for roughly 3 million lost jobs in the current jobless recovery. The other 6.72 million would have been lost even with the earlier responses because the output gap was so large.

A change in labor market dynamics accounts for about 3 million of the over 10 million missing jobs in mid-2011. This shift can be traced to weakness of labor and growing assertiveness of management. But even with the labor-market institutions of 1955 through 1985, the weakness of aggregate demand in the recession and recovery would have cost roughly 7 million jobs instead of the 10 million jobs that are actually missing compared to normal economic conditions such as occurred in 2007.
The recession itself is usually and correctly traced to the collapse of the housing bubble and the post-Lehman financial panic. But the recovery has been unusually weak, completely unlike the economy’s rapid bounce-back in 1983-84, and this requires an explanation as well. The best place to start is the double hangover approach, which explains not just the collapse of residential structures investment but also the continued and growing weakness in consumer spending. Perhaps the most surprising result of this essay is that the spending component responsible for the largest share of the missing jobs is not residential investment but consumer spending on services.
Posted by russell1200 at 5:00 AM

Interesting and accurate as far as it goes but I would still contend that the ultimate cause is cheap energy ie: oil. Without that component allowing cheap transportation we would not be able to create a worldwide labor competition. Ultimately what we see is a collapse in the balance of trade when oil reaches a certain cost percentage-wise.

Maybe, but the first great world integrated economy got started under the age of sail. Steam existed, but was generally used as auxilary power.

It was also a time period that eventually lead to a huge amount of labor unrest.

Flipping that around, obviously today everyone uses fuel oil. But the sailing ship would have held out a lot longer if the German's had not blasted so many of them in World War One.

Ahh but you are only thinking about ocean crossing which I will grant you sail is viable. Yet the largest boon to globalization has never been sea faring but overland transportation. During the age of sail overland was handled by cheap energy ala wood or coal but even today those have hit a peak and going back to them from oil would still be a decrease. A decrease that would be just as deadly to todays growth based, fiat money economy as having nothing to fall back on.

trade and globalization to a point has always been around the coasts it was the interior being opened that caused the boom.

What grabs me is the "technological improvements". I guess a shadow of this is the change in economical possibilities for out of work folk. If you ran out of work you grabbed a saw and headed for the hills to cut fire wood, or started baking bread that the local grocer would trade for groceries. Today poor folks get their heating bill paid. You might cut some wood, but our local wood is provided by a fellow who hauls a tractor trailer load to his yard and feeds it into a machine that cuts and splits at the push of a button. All he does is drives the back hoe to load his dump trucks. A one man operation that spits out ten cord a day including cutting and hauling 90 miles. Try getting Walmart to trade for your homemade bread. It does sit on the shoulders of cheap energy, but it also sits on the shoulders of cheap money. I would bet my last gold brick my wood cutting friend is mortgaged till death. How many of those folks go bankrupt after killing off 90% of the competition. I've seen it happen on a semi annual basis with the local cabinet shops. Dennis

The interior of the United States was initially opened up by canals. It was only a short period prior to the introduction of the railroad, but a critical one.

It is a back drop to the conflict prior to the civil war. Virginia had been the dominant state early in the Union, but with the opening of the Eire Canal, and the planned opening of the canals that would connect the Mississippi to the Great Lakes, Virginian, and the South in general, saw their influence waining.

If you throw into the mix a little of the conspiracy type thinking that was so popular in the day, when the South speaks of the war being about economics and not slavery this is one of the root causes.

Obviously railroad had a huge impact. Obviously, losing access to fossil fuels would be dramatic.

But we have enough coal to power our railroads for a really long time. IMO it is all the other stuff (like fertilizer) that we have learned to do with fossil fuel that is the long term insuperable problem.

Put the key is the words "long term". If you cannot get to the long term, because the short term kills you, the long term viability is somewhat moot. If we cannot find a way to gently ween ourselves from fossil fuels we are going to have some serious problems. And the prognosis for the moment is a bit iffy.

Your point reminds me of the that anecdote: Ask your friends how much you would have to pay them to drive you around in your car for 1 mile. Then ask them how much it would cost to push your car for one mile. We grossly underestimate how much work is done by technology and machines. We say we are working when what we are really doing is pushing buttons and (hopefully) using our brains.

One of my pet peeves is all the talk of womens rights as if it was some sort of liberal conspiracy started in the 1960s, when it is rather obvious that the change of the traditional household (and devaluation of male strength) marched right along with mechanical, transport, and communications of their day- starting in the 18th century.

The technology changes the entire backdrop to our civilization, and people are not even aware that that is what is making the changes. Outside of the Amish, we make all these changes without ever really even pausing to think what will change in the long run.