Steven Amsterdam Things We Didn't See Coming is yet another interesting apocalypse-in-progress/post-apocalyptic novel. It is a bit quirky at times.  We never learn the name of the lead character, and best as one can tell, it is set in Australia. It is the first novel of this type that I have read that is set in Australia (although there are more on the way - actually they keep popping up - here is another).  I suspect that many Australian releases (excepting the classic Neville Chute - On the Beach) never make it to the States. 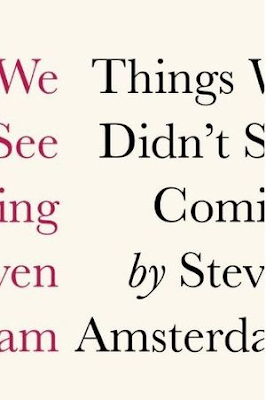 Steven Amsterdam, currently is living in Australia.  He was born in New York, and spent most of his life in the United States.  Apparently apocalyptic activity is attracted to him as he was living in LA for the riots after the Rodney King verdict, in New York for September 11, and in Melbourne for the bushfires of Black Saturday; which might explain why he is both a psychiatric and palliative care nurse.

The story is a combination of episodic short stories, all with the same main (unnamed) character. Although many of the stories have a considerable leap in time and place, there is a strong continuity within them. The various realities of the collapse are ever changing and often very strange, but there is a "realness" to them. Many of the stories deal with issues of personal morality, love, and survival.

As a way to set the mood, and introduce the main character, the book begins with a chapter were the young protagonist goes out to the countryside with his family- getting ready for the year 2000 millennium bug.  As we nothing happens.  But the breakdown begins soon enough.

The middle section of the book has the character meet up with a very seductive young lady: Margo. She is very competent, and completely unreliable.  So of course they become partners. The tension of a relationship where there is both suspicion and attraction is thick enough to cut.

At the mid-point of his time with Margo, he has managed to become a mid-level bureaucrat. She has convinced him to forge some IDs for Margo and himself:

And what will Margo and I do when we arrive at this new paradise? Use the grants that go with the new identities and start our lives over, like everyone else. Enjoy being the least-missed dead people from Brownlee...Wait for the next event to push us along.
Most evacuees don't learn. They try to start over someplace exciting (a target) or temperate (subject to floods, fires or earthquakes). Or they identify this month's most thermo-politically neutral region. They assume they're not going to have to pack again. Even though it may be the third or fourth time for some of them, they're still completely tweaked with relocation fever: Full of piss and, as the expression goes, vinegar. They take their first steps around their new home and get confident; make friends, buy appliances, plant tomatoes. You want to shake them: Do you really think this time it's going to be different.

The later portions of the book, to my mind have a bit of sadness to them.  As far as we know, after Margo is gone, he never begins another relationship.  He is simply finding ways to make a living within the new society: getting from point A to point B in time. Although society seems to come out of the worst of its problems, there is no utopia. In fact it is closer to a Libertarian Dystopia:  everything is available if you have the money.  If you have not money there is nothing available. The final chapter is rather touching, a bit of a surprise, and too much of a spoiler to discuss further.

The book has  a greater realness and immediacy than almost any other apocalypse-in-progress, or post-apocalyptic book than I can think of.  The very oddness to it, is the oddness of an future surprises.  Many of these books follow a script that are pretty predictable.  This one is not.
Posted by russell1200 at 5:00 AM