The Profession: A thriller: A review. 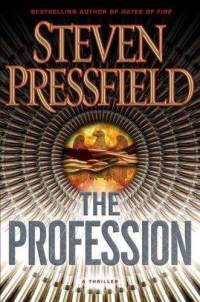 So when we fall into Steven Pressfield's world in the Summer of 2032, the world of The Profession, what exactly have we fallen into? It is a world with lots of piloted drones. Drones used by street gangs, drug dealers, terrorists, the military.....you get the idea. There is also a fair amount of the portable fire power that you would see on todays battlefield but generally adopted to more mobile, lighter, less expensive vehicles. It is also a world were tactical nukes are used, and terrorists have made use of nuclear weapons themselves. The home folks want nothing to do with having their boys incinerated by nuclear bombs, and the governments, and interested corporations, of the world have turned to the heavy use of mercanary troops to do their military policing for them. Most of the action occurs overseas, so it is discussed more than it is seen, but the use of terrorist-nukes has made the Patriot Act seem like J-walking laws compared to the new measures enforced.   A discussion of some issues brought up by the book is at Bloggingheads (video).
Steven Presslfield has written a number of critically acclaimed historical novels mostly set in the time period of Ancient Greece or Alexander the Great’s Macedonia. However, his first novel, is about golf. Or sort of about golf. I cribbed this from Amazon's comment section:


"The Legend of Bagger Vance" is a retelling of this epic, and a summary of the Bhagavad Gita, in a wonderful golf story. In the Mahabharata, Arjuna must fight a war against his step-brothers and cousins over possession of the kingdom. It is a righteous war, for he and his brothers are the heirs. But he refuses to fight, saying that war is futile and that it would be better to die than to fight one's family. So his charioteer, Lord Krishna, an incarnation of God, has to park the chariot and give him a really long lecture about why he should put aside his doubts, do his duty, and fight. Of course, it takes him the whole Bhagavad Gita to explain why this is a good thing to do, and it involves helping Arjuna understand who he really is, who God is, and what the nature of reality is. Along the way, he explains how to find peace in the midst of action, and to discover our true nature.
Bagger Vance was a good enough book to be made into a movie, but as you can see there is more than one level to the story.
Well the fact that his latest novel is boldly called a "Thriller" should lead you to understand, that while it is very thrilling, there is a whole other subtext going on.
The story is channeling the intrigues, double crosses, and personal politics that the author has written so many other novels on. I have tried to see if there is a direct story-to-story channel as with Bagger Vance.
The general story is that of the “hero” Gent, and his (somewhat) father-like commanding officer General Salter. They have served in some very dicey circumstances when both were in the marines, and latter after they moved on to more private military enterprises. While the General certainly furthered Gents career, it is not a one way street, Gent is a very good soldier and is able to pull a lot of weight in the small unit irregular fighting that occurs in the modern small wars setting which they work within.
If we look for Bagger Vance-like comparisons, The hero’s first name, Gentilhomme, can be roughly translated as a gentleman of the older sort- a knight if you will. There are a number of allusions to Alexander the Great, and his father Philip. This possibly would cast the General of the novel as Alexander, and Gent as his close companion Hephaestion. But although both Alexander, and his father Philip are mentioned in the novel, Hephaestion is not mentioned in the novel.
There are a number of references to Alcibiades, the Athenian statesmen who was exiled from Athens and served with both the hated Spartans and Persians before returning to Athenian service. The discarded General Salter even portrays his return to service within  the United States as the “Return of Alcibiades. There is a lot to recommend the association of General Salter with Alcibiades, but some elements of Alcibiades’ career make him an odd choice for the close association. While the Greeks were not exactly nationalist in today’s terms, they did have a prototype form of national unity. Alcibiades' service with the Persians would have been viewed very much with distaste by the Athenian public. Alcibiades' later career after his return was also not uniformly successful.
There are references to The Four Hundred of Athens, and The Thirty under Critias.  Critias is known for stating that “religion was a deliberate imposture devised by some cunning man for political ends”, and the General is decidedly not in the religious camp. Critias, similar the General, was also known for being rather brutal towards his down-fallen enemies.  However, we have more of a strong man situation here, than an rule by oligarchy.
In the end, the best comparison seems to be with Augustus Caesar, the first Emperor of Rome who brought Roman Empire to greater power, but ended the Republic.   The back story of Augustus does not fit as a point-by-point comparison, but there are a number of similarities.  You  have something that looks a lot like the appeal by Cicero to Augustus by Gent. Finally you have one of the General's female allies being referred to as Livia. Livia was the machinating wife of Augustus, and a rare female power in her own right.
So what you have is a book, that by appocolypse-in-progress fictional standards is pretty fast paced, mixed in with the dangerous machinations of the politics of an earlier period.

You also get cool quotes:  "Let us go forth and win glory, or cede it to others" (Sarpedon to Glaucus).

You also get some interesting intuition on how tribal (strong man based) societies operate.

And finally you get some thoughts on mercenary small wars leadership from Gent:


"Chief." It’s Chutes, stepping forward before the others. "I'm sorry for what I said back there in Nazirbad..."
"Forget it."
He apologizes for refusing, at first, to go back after the Fijian, whose name, we have learned, is Manasa Singh. Chris Candelaria seconds this.  I thank them both.  It takes guts to speak up in front of the others. The act is not without cost to proud men. I appreciate it and I tell them.
The men surround me in the headlight-lit court. Safety lies two hundred miles east, in the dark, across country none of us knows-back valleys and passes peopled by warriors who will where we are, how many we are, and where we are heading. Every one of us knows this, and every one feels the fear in his bones.
"Because we went back when we didn't have to," I say, "We know something about ourselves that we didn't know before. You know now, Chris, that if you fall, I won't abandon you. I'll come back, if it costs me my life-and so will Q and so will Junk and so will Chutes. And we know the same about you."
A bottle makes the rounds.
What we did today in Nazirabad," I tell my brothers, "would earn decorations for valor in any army in the world. You know what I'll give you for it?"
I grab my crotch.
Chris Candelaria laughs.
Chutes follows. The whole crew shakes their heads and rocks back and forth.
You have to lead men sometimes. As unit commander, you have to put words to the bonds of love they feel but may be too embarrassed to speak of - and to the secret aspirations of their hearts, which are invariably selfless and noble. More important, you have to take these actions yourself, first and alone, that they themselves know they should take, but they just haven't figured out yet.