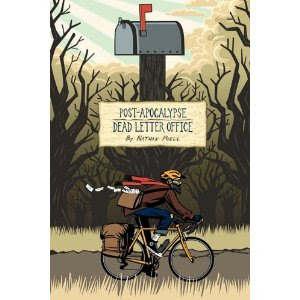 Nathan Poell, author of  Post-Apocalypse Dead Letter Office , is a technical services librarian at Baker University who has had his poetry in Kansas University’s Kiosk, and several nonfiction pieces (apparently about apple cultivation) with Mother Earth News and Brew Your Own. Apparently he brews beer in pumpkins.


Post-Apocalypse Dead Letter Office  is an interesting and relatively inexpensive e-read. After what appears to be EMP-like event the world goes to pot.  The focal point of the book is the State of Kansas; although we occasionally here from other sections of the country.
Since the post office cannot deliver, a commercial bicycle courier service is set up which for a significant fee will deliver letters and packages. They obviously do a good job, but in the chaos they cannot always find the recipient.  In that event, they are allowed to open the letter to see if it will give them more clues as to the recipients location. If after continued search, the letter is still an orphan, it goes into the dead letter pile at the local post masters office.  All of this is outlined in the forward, which is a letter of a retiring post master to his successor.

The e-version shows a snippet of the original letters. At the e-books website it shows the entire original. If you read them at the website, you will want to go back to the earliest postings.
The novel has received some local and online publicity for the author: An interview at Circle into Square.

HL: For what it's worth (and without giving anything away), I thought the ending was exactly how it should end and really beautiful. Did the end play into your reversing the chronology of the book?
NP: Thanks, and while there were other considerations, the last/first letter definitely did influence how I ordered things. The first draft of the last (chronologically first) letter of the book was somewhat off the mark, and so I went back and revised it quite a bit. I think the final version of the letter ends on just the right note, and I'm glad it's the last letter the reader gets to.

It has a nice write up at Lawrence.com


Perhaps one of the most fascinating aspects of the novel is its online presence. A member of the online community on the website MetaFilter, Poell asked people to transcribe letters on whatever materials they deemed appropriate to exist post-apocalypse via the site’s mail art group. Since new paper would not be available after a catastrophic event, transcribers used scrap paper, chipboard, cardstock, or any other material that could potentially be found and put to use in the world encompassed within the novel.


The result of these transcriptions is a collection of creative letters, which are also part found object art. In one instance, the transcription of the letter appears on a microwaveable macaroni box, held together by bandages. Other letters are written right over leftover magazine pages, or on the insides of cereal boxes. One letter includes plastic glasses with colored frames, which are said to reveal secret information within the message.
It also received a mention at the Kansas City Star, and a nice write up at the student written Baker Orange which I used for some of the biographical information.  I am going to go over a few items that give me pause first, that way I can end on a positive note.
The book has seems to have an agenda at times, various groups that one might think a PC, poetically inclined, archival person, working University, who writes for Mother Jones author might not much care for do not come off particularly well:


·         Commercial drug dealers. This isn't a big surprise, except that the people who grow for local use are treated in a much more benign fashion. In fact the local pot growers seem to be his big heroes.
·         Local law enforcement. Given the Mother Jones connection, it is not too surprising they don't get too much good press. The oddity here is that much like in Ardath Mayhar's The World Ends in Hickory Hollow, even a little bit of effective law enforcement could make a huge difference in these small towns. You would expect a bit of survivor bias to make law enforcement look better.
·         Gun owners: The author has chosen to downplay the gunplay. I understand the logic, but I think it greatly lowers the tension level.  It is not clear to me how people defend all these isolated locations that are mentioned without mutually supporting fire. Where isolated settlers held out against the Indians, and they often did not, it was generally through the use of long guns.
·         Mormons: Even though they have one of the few functional large urban areas, they are noted for being really strange and isolated. Mormon's can be accused of a lot of things, but they are one of the most heavily evangelizing religions out there.  Not my pick for the unhelpful isolationists.
·         Survivalists/preparers: the only obvious survivalist is crazy. This seems to be a common theme in many of this apocalypse-in-progress, or post-apocalyptic books. It is almost as if authors need to be punished the survivalist characters for being correct within the context of the novel. Off the top of my head: Carla Buckley's The Things That Keep Us Here, Susan Beth Pfeffer's This World We Live In, James Van Pelt's The Summer of the Apocalypse.

On a final note, the build up toward the final resolution is a bit too cute. The reverse chronology is interesting; I just don't care for where it went. Depending on your biases and preferences you can come to a resolution as to what occurred. It's a sterling example how to lose the heat of the moment.

O.K. now that we are past the quibbles, we can end on a positive note; because in all I did enjoy the novel.

The reverse chronology does build up a certain amount of tension as to find out what happened.

The letters also allow the story to jump around and give many points of view. It allows dispersion in both geography and time. In (quasi-) realistic dystopian works like this, the characters should be in a fog as to the bigger picture. The letter writing allows an expansion of knowledge, while the participants are still very much in the dark. If they weren't in the dark, they wouldn't be writing letters to people who never get them.


Global warming, is handled in a realistic fashion. The United States is often considered to be one of the better off places to ride out that problem, but in world that has suddenly gone local, that doesn't help much when it is your well that has run dry.  The weather plays out like a drought spell within a warming condition.  It is also possible that it is simply a normal drought, since they can be a fairly major problem as well.

………………………………
* Cosy: stories involving a sudden non-violent event wiping out most of civilization; the cosines refers to the conceit of a band of survivors left to rebuild society in relative comfort. The term was originally coined by Brian Aldis who used it to refer to John’s Wyndham’s novels, particularly The Day of the Triffids. Note that the lack of violence is relative to other ways to end the world that were: such as nuclear bombs.