The Four Cossacks of the Apocalypse

Krugman in 2006 (no link but ht here) writing about the decline of serfdom in Europe and its later reemergence in Russia.  He is sighting a work by Evsey Domar that can be found at the bottom of this very good post by Brad DeLong.
Serfdom, the attachment of unpaid labor to the land withered away in Europe prior to the Black Death.  But in Russia it was reintroduced and further slavery was institutionalized in various forms on the other large European frontier:  Colonial America.  Why?
You do not bother to make someone a serf or a slave, if you can pay them less than what it would cost to house and feed them yourself.  Serfdom was popular after the population collapse of the following the mayhem after the Fall of Rome.  But Europe by 1300 was in an over-populated Malthusian vice.  Labor was very cheap, and land was expensive.  Landlords had no need for chattel labor.
But now suppose that for some reason land becomes abundant, and labor scarce. Then competition among landowners will tend to push up wages of free workers, and the ruling class will try, if it can, to pin peasants down and prevent them from bargaining for a higher [wages]. In Russia, it was all about gunpowder: suddenly steppe nomads were no longer so formidable, and the rich lands of the Ukraine were open for settlement. Serfdom was an effort to keep peasants from taking advantage of this situation. (And if I've got it right, those who were venturesome enough to run away and set up outside the system became Cossacks.)
Meanwhile, the New World opened in the west. Sure enough, the colonizing powers tried various forms of indentured servitude - making serfs of the Indians in Spanish [and English] territories, bringing over indentured servants in Virginia. But eventually they hit on a better solution, from their point of view: importing slaves from Africa.  Krugman, Serfs Up, The New York Times, 2006.
Can we think of a scenario like this:  Lots of land, but a whole lot less people?  If this happened after the collapse of Rome, when else might it happen?

I think a palomino would make a very nice Cossack horse. 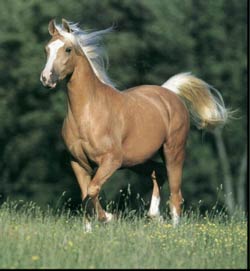 ﻿﻿
﻿﻿﻿﻿ ﻿As a post script, DeLong answers the questions as to why Serfdom has not reasserted itself in the modern world:


Why hasn't bound labor reemerged in the modern world?  Elites in developing countries can no longer be confident in their ability to earn hefty incomes by employing workers and paying them much less than their average product: an elite monopoly of land ownership is no longer worth much. So why haven't they responded to the potential erosion of their collective economic edge by turning to politics and force to bind workers?
One answer is that, to some extent, they have: Consider that modern states are surprisingly effective as tax-collection machines, and in large chunks of the world the elite's power and (relative) prosperity is rooted in its "new class" control over the flow of resources from the state. Consider, also, the Communist Party of Vietnam--what is it but a gang labor boss for unfree labor deployed to produce shoes for Nike?  Brad DeLong, The Causes of Slavery or Serfdom: A Hypothesis, May 10, 2003.
Which is probably why some people seem to be awfully impatient for the apocalypse to hurry up and get here already!
﻿
Posted by russell1200 at 5:00 AM