The first time they dipped into the reserves was for the first Gulf War, the second was for Huricane Katrina, the third was.....to get reelected.  Note that one of the positives that is mentioned is that lower prices will put pressure on Iran.

But Saudi Arabia is the deadly enemy of Iran, and they said that they were going to make up the difference (Reuters) in lost oil from Libya to stabalize prices.  Obviously, the bottomless well has found its bottom, or at least has found that the spigot at the top is of limited size.

Front page top story of Wall Street Journal hard copy today:
World Oil Reserves Tapped
U.S., 27 countries intervene and Release 60 Million Barrels to Drive Down Prices
Keith Johnson and Guy Chazan, Wall Street Journal, 24 June 2011.
The U.S. and 27 other countries agreed Thursday to release 60 million barrels of oil from strategic reserves, temporarily driving down oil prices to a four-month low in a controversial effort to prop up the world's fragile economy.
The White House said the decision to tap oil reserves—only the third time strategic crude stocks have been tapped in a coordinated global effort—is meant to help replace some of the 140 million barrels of oil production lost as a result of the three-month conflict in Libya, and to boost supplies during the peak summer driving season.
The intervention drew criticism from the oil industry, business groups and Republicans in Congress, who accused President Barack Obama of making a political choice to raid emergency oil supplies instead of embracing their proposals to spur increased domestic oil production.
A quick look at the chart shows that the reality is that it will be the United States that does most of the releasing.  Japan million barrels in reserve, and Germany has 108.  Both were countries we (thankfully) squeezed to death through oil shortages in World War 2, so they are a little less likely to be using reserves for what is not an immediate danger.
Of course if Saudi Arabia went offline, as we were discussing in our last piece, we might want that oil back.  But in fairness, if Saudi Arabia goes offline, you are probably looking at rationing –or $20/gallon at the pump- in any case. 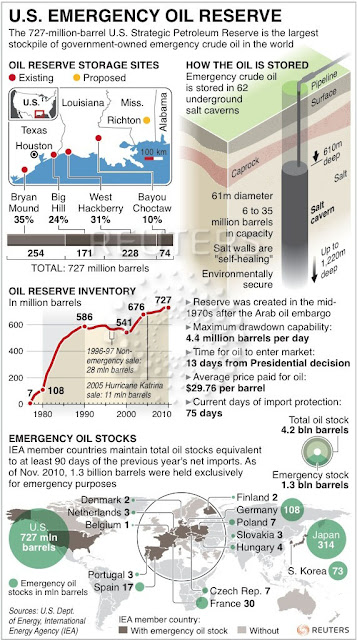 Yes, but I am just throwing out a large number.

Earlier I did a back of the envelope calculation that said something to the effect that if oil went to $220/barrel, gasoline prices would be at $6.16. but $220 was the guess based on Libya plus one other. Saudi Arabia would be worse.

If the Saudi's went quickly, I don't think there is an equation you could plug in that would give you a "knowable" number before hand. How much do you pay for gasoline if you run out of gasoline- hopefully temporarily. The amount is not unlimited, because people don't have unlimited amounts of money.

But at $20 per gallon, you could see sufficient people buying mopeds and chugging there way into work. But the add on costs to the price of anything else would have people starving.