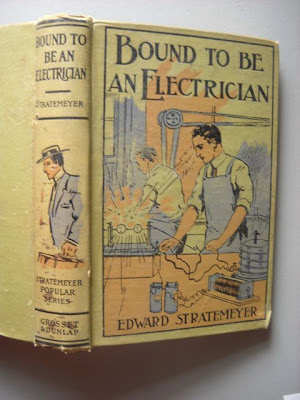 I have a book on my shelf:  Edward Stratemeyer’s Bound to be an Electrician, or, Franklin Bell's Success written in 1897.  It is a Horatio Alger adventure: the young lad meets Thomas Alva Edison, and rescues  young lady from being run over by trains, and other such types of adventures. 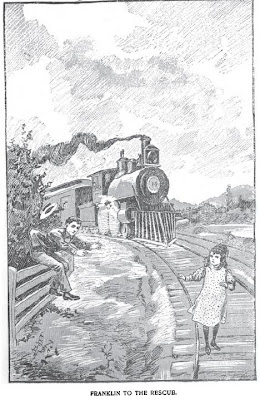 At one point his kindly boss asks him to go on a mission to find out who is stealing his patent for a wonderful new medical device.
I am the owner of a medical battery, known as the Bliss Thermo-Galvanic, of which I purchased the rights some five years ago… The battery is now manufactured by the H.Y. Smith Co. of Chicago, under royalty.  When old Smith himself was alive, the royalty was promptly paid, but since he died, and his sons took hold of the business, matters have taken a different course. I have it straight that they put out more batteries, yet my income from the royalty is smaller.”
You mean to say that they are cheating you out of part of the royalty?” questioned Franklin with deep interest.
So off Franklin goes on another adventure to bring the chicanery of these crooks to light.  But you notice that there is no hint that there is any problem with the device itself.
Electricity in the 1870s was pretty hot stuff and had all sorts of stimulating properties.  One of uses it was put to was the curing of various mental ailments.  In this case you would take a battery and run a low level current through them.  It likely made them tingle a bit with much in the way of pain.  To the extent it “cured” people, it did so because they thought they were supposed to be cured.  I suspect it worked no worse than the much more painful electro-shock treatments controversially still practiced today.
The treatment of mental ailments has always had elements of quackery to be found within its practices.  If it is not demons possessing us, it is some sort of ethereal imbalances.
Not very long ago, we used to try and talk people through their difficulties.  But with the introduction of Prosac in 1987, that changed.  Said to correct chemical imbalances of seroton in the brain it became a wonder drug.  Soon a host of other medications were brought out to treat other newly found imbalances.  The number of people treated for depression tripled in ten years, and 10% of our population over the age of six now take antidepressants.
But how strong is the evidence that these drugs work?  And if they work so well, why are we treating more people as time goes on and not less?
At the New York Review of books Marcia Angell review three books that investigate the modern practice of the mental health psychiatric industry: Irving Kirsch’s The Emperor’s New Drugs: Exploding the Antidepressant Myth, Robert Whitaker’s Anatomy of an Epidemic: Magic Bullets, Psychiatric Drugs, and the Astonishing Rise of Mental Illness in America, andDaniel Carla’s Unhinged: The Trouble With Psychiatry—A Doctor’s Revelations About a Profession in Crisis.  As Ms. Angell notes, the authors are not impressed with the results:
The Epidemic of Mental Illness: Why?
Marcia Angell, New York Review of Books, June 23, 2011, Hat tip:  MR.
It seems that Americans are in the midst of a raging epidemic of mental illness, at least as judged by the increase in the numbers treated for it. The tally of those who are so disabled by mental disorders that they qualify for Supplemental Security Income (SSI) or Social Security Disability Insurance (SSDI) increased nearly two and a half times between 1987 and 2007—from one in 184 Americans to one in seventy-six. For children, the rise is even more startling—a thirty-five-fold increase in the same two decades. Mental illness is now the leading cause of disability in children, well ahead of physical disabilities like cerebral palsy or Down syndrome, for which the federal programs were created.
A large survey of randomly selected adults, sponsored by the National Institute of Mental Health (NIMH) and conducted between 2001 and 2003, found that an astonishing 46 percent met criteria established by the American Psychiatric Association (APA) for having had at least one mental illness within four broad categories at some time in their lives… Most met criteria for more than one diagnosis. Of a subgroup affected within the previous year, a third were under treatment—up from a fifth in a similar survey ten years earlier…
The authors emphasize different aspects of the epidemic of mental illness. Kirsch is concerned with whether antidepressants work. Whitaker, who has written an angrier book, takes on the entire spectrum of mental illness and asks whether psychoactive drugs create worse problems than they solve. Carlat, who writes more in sorrow than in anger, looks mainly at how his profession has allied itself with, and is manipulated by, the pharmaceutical industry. But despite their differences, all three are in remarkable agreement on some important matters, and they have documented their views well.
First, they agree on the disturbing extent to which the companies that sell psychoactive drugs—through various forms of marketing, both legal and illegal, and what many people would describe as bribery—have come to determine what constitutes a mental illness and how the disorders should be diagnosed and treated.
Second, none of the three authors subscribes to the popular theory that mental illness is caused by a chemical imbalance in the brain.
And at this point, she is only just getting started.
We have had posts about medical and research quackery in the past.  Psychiatric disability is also one of the growing causes of disability within or increasingly unaffordable disability system.  We are spending a ton of money on unhappy people.
I won’t argue against the idea that we are crazy.  My only question is “Crazy in what way?”
Posted by russell1200 at 5:36 AM