A Distant Crossing: A Review

An economic collapse tale, Thomas Park’s novel, A Distant Crossing, was first published, or least copyrighted in 1991.  The story line appears to be unaware of even the first Gulf War (Desert Storm) invasion of Daddy Bush, so the writing appears to be coming from the earlier Reagan years.

A synopsis from Amazon 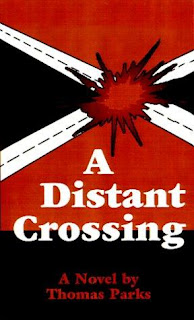 A synopsis from Amazon


The novel, "A Distant Crossing" is a book that will not only entertain you with a fast-paced, dynamic storyline, but it will make you stop and think at many points along the way. We live in a complex society with confusing, competing images broadcast at us from many sources. This book simplifies, and reduces everything to the most basic of questions; what happens if all the "smart guys" in government and industry "get it wrong"? What happens if mistakes are made that unravel the economic, monetary and political threads by which society binds itself? Finally, what happens to the little guy forced to rely on his basic instincts for survival? If you read this novel, you may find yourself forced to answer those questions. Add that to the compelling characters whose lives will control you for 500 pages, and you will find out why more than one person has called "A Distant Crossing" a great read.
LOL- that is pretty enthusiastic summary!  I think it is fair to say that it is a little more philosophical than your typical action-adventure tale, but I wouldn’t push that point too far.

The novel is very close to a "militia-book."   Totalitarian control types, generally military, use the financial economic collapse to bring a new order to the United States.  The totalitarian types seem to be completely home grown, so it does not read like some sort of Red Dawn scenario. The book is set in a time when Vietnam was the last major war that we fought.  If there is any remembrance of the heroics of Reagan's mini-engagements there is no sign of it here.

The reason it does not become a militia book, is because the hero does not spend much time interacting with the U.S. government.  Very early on he meets up with an Australian Vietnam Veteran (yes they were there), and the two have a variety of desperate adventures trying to negotiate, bikers, military police types, and then Mexican criminals.

As noted the book has its philosophical moments:


His mind wandered to another time - another life, really - filled with promises, high expectations and self-demands.  And arrogance, mostly, in believing that what was, would always be.  He remembered the impatient faces of those who chose not to consider the possibilities.  Theirs was an undemanding faith that the system, however abused and distorted, would always prevail.  A generation given the limitless land. To think, the fount the limits.
But the action starts off fairly quickly.  Before your 2% of the way through the book, you have an appearance by some bikers to liven things up.  You have a numerous variety of the type of one-on-one action scenes that provide the energy for most action adventure style novels.  The hero starts off as no great warrior, but as time goes on becomes proficient.  As with most of these stories combat injuries tend to put the bad guys down too fast, but at least the good guys injuries are not shrugged off in a couple of days.   It takes at least 4 days.
As end of the world fiction it is dated.  A number of the scenes run on for an excruciating length.  The "big brother" as part of the apocalypse scenario is not one of my favorites, but it is not the major theme here.  If there is a theme, it would be finding your inner will to survive, when all is falling around you.
So as a novel, it is entertaining.  As an example of what the world may be head for, it would have to rate as "highly improbable".
I am not aware of any other novels by this author.  If he wrote any other ones, he did so under another name.  I emailed him asking if he has anything else he has written, and while my email did not bounce, he has not responded.  If this book was truly his first effort, I would rate it very highly as a first effort.
Posted by russell1200 at 9:06 PM