Guy Salvidge’s Yellow Cake Summer is set within an overheated, post-apocalyptic slow crash Western Australia. It is the sequel and conclusion to his earlier Yellow Cake Spring. 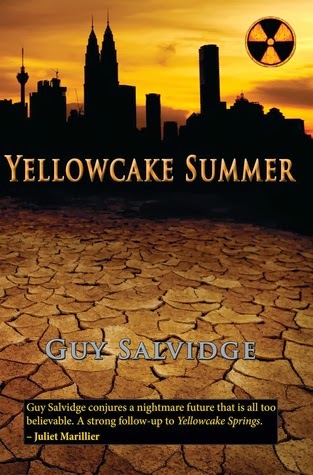 We discussed the author's Background when we reviewed The Kingdom of Four Rivers.  The author is a school teacher from Western Australia, it is my understanding that he does not intend to write anymore science fiction, so we likely we will no longer being seeing any more apocalyptic fare from him.
The novel involves a return of our earlier protagonists, Rion and Sylvia, by separate routes, to the Western Australia located, Chinese owned nuclear facility.  In this world, China is a dystopian mess, and Australia is a collection of collapsed urban hubs surrounded by a great lawless rural wasteland.  We get to see a little bit of this wasteland, and that is one of the more interesting sections of the book.  We also return the earlier novels controlled dreaming meme, and add to it very intrusive/invasive observation methods.
Most of the story involves some sad sack nuclear protestors, and the Chinese and Australian governments nasty efforts to keep the protests from getting out of control.  There is a fair amount of tension built up as we head toward the conclusion.
Unfortunately, while there is a certain amount of drama to the story, in the end it is a bit anti-climatic.  As noted, the issue at odds is the expansion of a nuclear facility run by the Chinese.  All of which would might lead one to believe that their are some sort of dire territorial issues at stake, except that the territory at stake is a barren post global warming dried up wasteland.  The Australian Government is more interested in protecting its citizens only as a matter of degree, they are not the standard bearers of liberty and justice.
In the end, nobody winds up being all that interesting, and the issues come across as rather small potatoes.  Beyond the individuals involved, life goes on as usual, without much enlightenment beyond the general dystopian warnings.
Did I enjoy it?  Not too much.  I am ambivalent. The author builds up an interesting world, but the story seems more like the middle connector to a trilogy than the conclusion of a duology.  I like a lot of the ideas, but the story left me a bit flat.  A lot of unrelieved, or maybe better stated as deflated, tension. The author writes well enough, that I lean toward a qualified recommendation.
We now come to our two descriptive (not qualitative) ratings: 1 to 7 with 4 the mid-point and 7 high. Realism does not include the cause of the collapse or apocalypse, but is otherwise an assessment of how close to today's world is the setting. Could you imagine your friends, or families living through the situation. Readability is not literary merits, but literally how quick and painless of a read.
Is it realistic?  It is more dystopian, than survivalist in the second novel, but it is a very near, plausible future.  Survival is not easy in either the dried up wilds, or the bleak urban setting either.  It is a seven.
Readability is fairly straight forward.  There is too much moping and pondering for it to be even remotely a page turner, but the author rights well and the story doesn't bog down.  The dream state sequences maybe add a little confusion, but any high level symbolism is buried enough that I missed it.  Not as much action this time around, so we will call it a 5.
Posted by russell1200 at 7:00 AM