The Last Werewolf: A Review

Glen Duncan's The Last Werewolf involves an unveiling (of the supernatural), and a passing (obviously) so it is in this sense apocalyptic, which literally means "an unveiling" or you might also call it a "Revelation".  The novel was planned as the start of a trilogy, and the second novel, Tallulla Rising .  I "read" this novel as an audio-book. 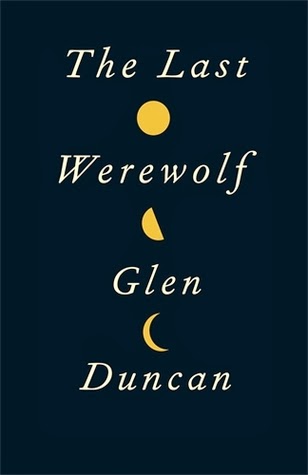 Glen Duncan (1965-) was born in Bolton, Lancashire, England, the first of his Indian-British family to be born in England.   He seems to have been the wild child of his family, being saved from a hedonistic collapse of his own by a trip to India with his father.  He currently lives in South London.
His tenth novel will come out in 2014.  Most of his novels seem to have bit of horror in their content, but they are not your standard fare.  Often the horror of the real world seems to intrude.  This novel was intended to be more of a mainstream breakout novel.  One way to do so seems to have been to juice it up with a lot of blood and sex appeal.
The book starts off with a very tired, anti-hero werewolf, who has hunters closing in on his rather nice lifestyle. But after 200 years at it, he just doesn't have the desire to put up much of a fight.  Anti-hero angst has been around for a long time, although the roleplaying game Vampire: the Masquerade probably fits closest to this world of darkness "world view". Cool angst ridden monsters started at least as far back as Ann Rice's Interview with a Vampire (1976).  The introduction of pornographically stylizations into the afterlife was pushed by Poppy Z. Bright's Lost Souls (1992).  It was new and interesting then; But it seems a little stale now.  Turning the "Cursed" individuals into werewolves, rather than Vampires, doesn't make it all that helpful.
Of course, the conceit of these "World of Darkness" scenarios is not so much that the world is falling apart, but that the world has always been a dark, brooding, dangerous landscape to begin with.   So if a typical "apocalypse" has the world collapsing under its rottenness, this scenario has the world being rotten pretty much from the start.   The world is controlled by dark forces unseen by the masses, et cetera.

Mixed in the endless musings and sexuality are some interesting bits of spy craft play.  Nothing that is likely to turn you into the next James Bond, but that theme does add a different flavor to the goings on.  At times you almost feel like you are in a John le Carré novel.  There is sporadic violence, and a number of sex scenes.

Did I like it?  It was annoying.  It had some very good moments interspersed with a lot of whining by the werewolf, and a lot of detail about what his "hot throbbing member" was up to.  It dragged on.  If you are used to reading those door stop Anne Rice books, that probably won't bother you. But unless you are fan of this specific genre, I think you will find it dull.   Which explains why the reviews seem to fall between people who loved it, and those who stopped prior to finishing.

Well it is set in what is supposed to be the modern world.  It's not like there are hobbits running around.  But I don't think I am going too far out on a limb when I say that the full moon wolfman is not very "real."  The spy craft will lift it to a 2.

The author is competent at putting words together, it is just that there is a lot of mental gyrations that have very little to do with moving the story along.  The extended sex scenes, and philosophic ramblings extend the length of the novel far past what the ideas are worth.  There doesn't seem to be too much in the way of hidden symbolism, or any tortured stream of consciousness though.  So I will call it a three.

Pioneer: At least they would have given us break from the long winded whoopee and moping.