The Undead Situation: A review

Eloise J. Knapp's The Undead Situation is a zombie apocalypse.  The story starts in Seattle, Washington before moving further inland.  The primary twist on the story line is that the main protagonist is an anti-social (described as a sociopath) loner/survivalist.  The success of this novel generated a sequel, The Undead Haze.  I "read" the novel, as an audio book. 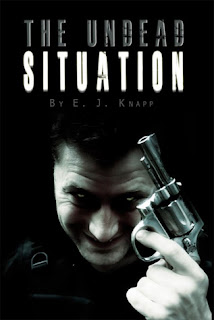 Eloise J. Knapp wrote the undead situation when she was a 16 years.  She is a resident of Seattle Washington, and is set to graduate from Seattle University soon.  When not writing horror fiction, she is also a cover designer.

Cyrus V. describes himself as a sociopath, but I would make a finer distinction and say that he is a highly antisocial person.  The key difference is, that while Cyrus is not particularly upset by the ongoing apocalypse and could care less about the fate of most others, he is not actively antagonistic in his endeavors.  If people don't come along and mess with him, he isn't going to go out looking for trouble.

But of course, trouble does come to him.  In the form of a young gal, clad in combat garb and armed to the hilt (see author photo below).  Zombies Cyrus can deal with:  people, not so much. Although a bit of a mess herself, she is a far more socialized person and finally manages to get Cyrus moving.
The tale than proceeds along a relatively fast paced adventure as Cyrus and new "friend" move out in a vehicular fashion to find a safer place.  The group gets larger as a couple of equally dangerous fellow travelers join in.   As with many of the today's zombie novels, the surviving people are generally a lot more dangerous than the zombies.
Did I like the novel?  Yes I did.  It was fast paced and fun.  Rather snarky and sarcastic throughout, it doesn't take itself too seriously, which generally keeps down any distracting analysis.  The ending was little contrived, but since very little of this seems to be of a real serious nature, and the whole concept of a zombie apocalypse is a bit contrived, I wouldn't say that was a big minus.
We now come to our two descriptive (not qualitative) ratings: 1 to 7 with 4 the mid-point and 7 high. Realism does not include the cause of the collapse or apocalypse, but is otherwise an assessment of how close to today's world is the setting. Could you imagine your friends, or families living through the situation. Readability is not literary merits, but literally how quick and painless of a read.
Realism is so-so.  Cyrus has a survivalist inclination, so it is not as if the issue of supplies is completely ignored.  But the whole story is set up to be one fast paced action yarn, without to much concern about realistic plotting.  Zombies are one of the few causes of collapse that, because of their continuing effect on the story line, I give a de-rating for realism. However enough of the problems come from people, and relationships, to warrant a realism is a five.
Readability is straight forward.  Obviously I was listening, but the story moves along fast.  I am guessing that the author read somewhere how to design a page turning novel, and did a pretty good job of it.  There are a couple of slightly slower sections that don't work that well, so I will call it a six.