Watership Down: A Review

Richard Adam's Watership Down is a catastrophic (versus globally apocalyptic) novel of rabbit survival set in the English countryside.  Although there were latter add-on stories, this novel was intended to be a stand alone story. 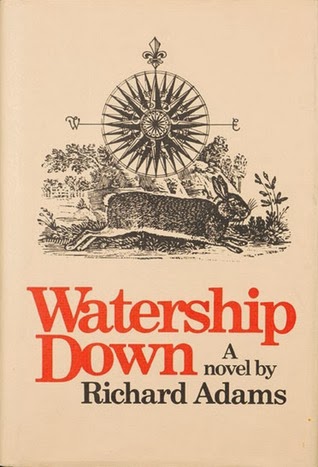 Richard Adams is a famous English novelist whose most famous novel is Watership Down. Originally composed as a bedtime story for his daughters, it is a modern classic  selling over 50 million novels, being one of the top 25 selling single-volume novels of all time.  His novel, Plague Dogs, also made into a movie, has apocalyptic themes as well.
So why review a book about rabbits, when my usual fare is either outright apocalyptic, or somewhat apocalyptic future-dystopian?  Well it is the fault of that "Druid-guy".

The worlds of pulp fantasy are by and large worlds in decline, strewn with immense ruins and scattered with artifacts no one can duplicate any more. The heroes of pulp fantasy are caught up in the undertow of decline, and their battles and quests are generally defined by legacies of the pre-decline past that have to be preserved or destroyed before the future can begin to take shape...

A brand of fiction commonly dismissed as sheer escapism, in other words, provides narratives more useful to the current state of the industrial world than the supposedly serious narrative of progress that still shapes every detail of contemporary public discourse.

And I agree.  A lot of fantasy is very apocalyptic in tone. It various from the modern narrative in that the hero is generally in a position to do something about the impending doom.  The situation can be corrected.
What makes Watership Down, a talking-animal brand of fantasy, is that it is not a tale of avoiding an apocalypse, but of surviving an apocalypse.  Almost from the very get go, the small band of rabbits have been turned out of their burrows, and are out in the wilds without the safety of shelter.  They are thrown on their own resources.  And like its swords and sorcery cousins, the heroes are in a position to make a difference.
So how do the rabbits survive?  How do their survivalist techniques differ from the two-legged survivalist novel?
In general, they succeed by being nice, and by being community spirited.  Some of their other methods are more traditional. They find a defensible position to live in. They work hard, are brave, cunning, and  doggedly determined.  So are these viable survival strategies for people?  I don't know;  But they certainly are nicer strategies.
The novel has a longer focus than most human-centered survival fiction.  This isn't too hard to do as rabbits don't live long, so it only takes a couple of years to get to the passing of a generation, and thus making it a more foundational story:  somewhat along the lines of George Herbert's Earth Abides.
So did I like it?  Of course, I read it when it came out in 1974, and my second re-reading was by way of reading it aloud to my son at bed time.
We now come to our two descriptive (not qualitative) ratings: 1 to 7 with 4 the mid-point and 7 high. Realism does not include the cause of the collapse or apocalypse, but is otherwise an assessment of how close to today's world is the setting. Could you imagine your friends, or families living through the situation. Readability is not literary merits, but literally how quick and painless of a read.
Realism?  It is a story about talking rabbits.  It is fantasy.  It is a one.
Readability?  It is an absolute classic.  It was published to instant acclaim.  There is some chatting, and philosophizing thrown in for good measure, but it reads pretty quickly for a book that is close to 500 pages long.  Remembering that this is not a qualitative ranking, we will call it a 6.
Posted by russell1200 at 7:00 AM

I enjoyed this book as a kid. To this day one of my brother's is nicknamed "General Woundwort."

Harry: That must be one tough brother!

It's been well over thirty years since I've read the novel...now I have a hankering to give it a second read. Thanks for reminding me why I enjoyed it the first time.

Stephen: Yes, since I was reading aloud, it took a little while this time. Having not read it in a long time, I forgot much of the story line. Be forewarned that the included map gives away a little too much information.