Equations of Life: A Review

Simon Morden's Equations of Life is a cyberpunk flavored post apocalyptic novel set in the scarred remnants of London after nuclear terrorists have destroyed much of the country.  It is set after, and includes many of the characters who were introduced in, the short story collection we reviewed earlier: Thy Kingdom Come.  The novel is a standalone story, but there are three other novels that followed this one. 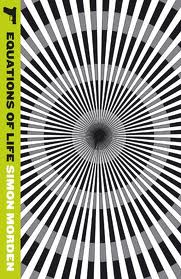 We went over the author's background in our earlier review, so we won't repeat it here. It is worth repeating that the metrozone series is a  Philip K. Dick Award winner.


The general theme, if you ignore the level of world wide ruin, is pretty standard cyberpunk fair.  Maybe not as much time in virtual reality, but there are all sorts of super bad assassin nun fighting women, dangerous AI computers, and dangerous machinations in a not very law abiding world. The poor are screwed, and the wealthy can fall quickly.
The hero is a not very reputable, not very legal, Russian immigrant who has been hanging out in London's overcrowded new-style slum district.  He is involved in physics research at the local university, but obviously has some underworld connections.  When he rescues a pretty young Japanese woman from Russian Ukrainian gangsters, he finds himself in the middle of a couple different fights: Gangsters versus Yakuza, and Church versus street gang.  And that is before it all gets really hairy.
The novel is entirely set in London.  It shows a plausibly collapsed society.  If not down to the stone age, it has the usual haves and the left behind.  Of course in a post-nuclear setting, even if the nukes were somewhat limited, the have-nots are in a very dire position.  Technology is advancing, but not everyone gets to share.
The novel is sort of a long form (367 pages) of an action adventure.  Outside of the various violent scenes, it is not a page turner, but it does move along.  Much of the action involves our hero getting himself beat up by various protagonists.  In fact there is so much of this, it becomes a bit implausible that anyone would even be still in one peace after even half the activities.
Did I like it?  Yes.  It has a reasonably enjoyable story line, even if all the adventurous activity gets to be a bit much after awhile.  A trimmer book would have been cleaner and faster paced without sacrificing much in the way of story.  So I enjoyed it, even if I am not willing to call it a new classic.
We now come to our two descriptive (not qualitative) ratings: 1 to 7 with 4 the mid-point and 7 high.  Realism does not include the cause of the collapse or apocalypse, but is otherwise an assessment of how close to today's world is the setting.  Could you imagine your friends, or families living through the situation.  Readability is not literary merits, but literally how quick and painless of a read.
Realism is moderate.  It is near future, but there are enough campy elements (zombie like nuke survivors, fighting nuns) of speculative science to give it an air of unreality.  That the hero comes up with plausible equations to fill in the voids of the unified field theory is not a particularly realistic element either.  So we will call it a four.
Readability is straightforward, a slightly overlong fast paced novel with only a touch of philosophizing.  A five.
Posted by russell1200 at 7:00 AM