We're Alive: a Story of Survival: A Review

KC Wayland's We're Alive: A Story of Survival (Season One) (website) is an audio book rather than traditional print novel that portrays life in urban Coastal California during a zombie apocalypse.  As an audio "book" it is much more like one of the old radio dramas. 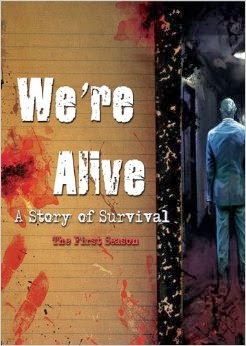 KC Wayland is a former high school teacher who now has a full time staff position at the Dodge College of Film and Media. Shane Salk is listed as an author, but a closer look at his biography leads me to believe he is one of the voice over folks.
It's alive has fast, and pretty smart zombies, with the occasional giant zombie, and other odd goings on that make the zombie breakout an odd combination of gritty urban survival and fantasy.  As a "radio show" style format, it has sound effects, and different actors taking up different voices.  There is a lot of dialog driven action.  With very limited narration, the elements of the story, for better or worse are talked through.
With such a deadly group of zombies, survival is very difficult.  The story is set in the Santa Monica harbor area of Los Angeles.  The initial nucleus of the survival group is thee army reservist, they report in to their headquarters just in time to get enough weapons and vehicles to survive the initial outbreak.  Early on, they save a number of young woman, who become love interests, and the focal point for much bickering.
This initial part of the series spends most of its time in a large apartment block that the survival group fortifies and holes up in.  It is sort of like Omega Man, but with more folks, maybe two dozen in all, although most of them are not "name" characters.  There are various, usually somewhat plausible attempts at survival outfitting, but the zombies are of such a dangerous nature that long range survival planning is a bit dubious.  There are some  people who wind up being dangerous as well, but the zombies are tougher: a rare turnaround for a zombie story these days.
The bickering between the woman is hilariously, and sadly realistic.  There are not a lot of children in the mix, but presumably their short legs couldn't move them fast enough to keep from being eaten.
Well, I don't want to get too involved with the details of the plotting.  The story is O.K., the tensions is built up well, and the radio play format is kind of fun.  It isn't the most stunning work of performance, but it is a lot of fun.  I am backlogged on audio-reading material, but I might get around to the other parts at some point. Since I rarely read more than the first part of a series, that would have to be a positive recommendation.
We now come to our two descriptive (not qualitative) ratings: 1 to 7 with 4 the mid-point and 7 high. Realism does not include the cause of the collapse or apocalypse, but is otherwise an assessment of how close to today's world is the setting. Could you imagine your friends, or families living through the situation. Readability is not literary merits, but literally how quick and painless of a read.
It is in a modern setting, but beyond that it is all cinematic realism.  Is a Terminator movie realistic?  Not really.  The de-merit for zombies, and rather fanciful zombies at that, is counterpointed by at reasonable concerns about supplies.  We will be generous and call it a 4.
Readability is a bit difficult, because there is not text associated with the audio.  So will simply deal with its complexity, and delivery.  The differing actors and sound effects make it easier to follow than some audio novels, and it is usually pretty fast paced. It lists at ten hours, but does seem like a rather long ten hours at times.  With the episodes, but not the resolutions, piling up.  so we will call it a 5.

Russel, I just stumbled on your blog by pure chance. Glad I found it. I don't know why I haven't before, because I always click on the name when someone comments on my blog and I should have pulled you up. But I'll be visiting now, rest assured.

as usual your reading voracity and writing skills leave me with not much to add..

but harry should make a better follower than me!

forgot to add - the omega man is a classic - just like those damn dirty apes ;-)

Jam: Yes, I remember Omega Man well. And I also read the novel, and liked it a lot, but I recall (vaguely) that it was different than the movie.