James Rawles’ Survivors is the follow up book to the very popular survivalist novel Patriots.  Rather then being a follow on book, or a precursor , it is set in the time place, but in a different areas of the country than the first book.  A ‘sequential’ if you will. 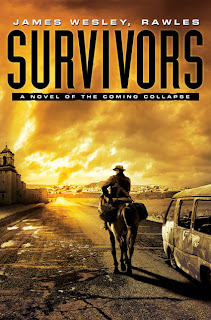 As far as its place on our cosy/cozy list, it is going to have more-or-less the same ratings as Patriots, except that the preparation category would be a qualified "No" (N*).  This would put it in the cozy category.  Any novel where the otherwise marginally prepared, become prepared through the  past activities of a deceased family member (it's always Dad) is very likely to wind up in this category.  Since  some of the best selling books within the category are cozies, that is not necessarily a bad thing.
Posted by russell1200 at 5:00 AM

As we discussed earlier I really think JWR has an estranged daughter who is possibly in a multi-racial relationship.

I found it interesting that after our brief discussion JWR also had a minor rant on his blog about "racist bringing his rating down" on the book. You will remember I had mentioned I did not find his race pandering particularly unpalatable although it was still obvious in "survivors".

I still think these quirks are connected.

I didn't remember the discussion, and don't follow his blog closely, so I missed the rant. There are some pretty "xenophobic" people out their in the electrical wonderland known as the net. I wouldn't think any rant like that would be directed toward our musings.

I presume that because he esposes a Christian Fortress doctrine in a relatively "white" portion of the country, that he is sensitive to accusations of racism himself, and is trying to dipel that notion in his novels. ? Maybe ? The point you bring up might also play into this area.

I thought the acusation of tokenism could probably be more fairly leveled at the first book. But his style (or lack of) makes it hard to really say if the intent is pandering, or if it is simply another implausible character setup. His "people of color" who are good guys are no less saintly then his nordic folks. For some reason I liked the story of the lady with her Grandma and her seed store.