John Grit’s Apocalypse Law is an apocalypse-in-progress novella set within a collapse caused by a massive viral contagion that is in the process of wiping out 95% of the earths population. 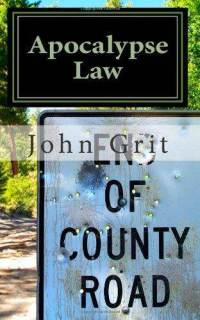 It  is a very quick, fast paced read.  I read it in an afternoon.  Some have complained about the abrupt ending, but I actually found it very much to the point.  The book is listed as volume I at Amazon so their may be additional books later on.
The novel is set in a rural portion of Northern Florida an area that to my mind has more the feel of Georgia or Louisiana than lower portion of the state.  It reminds me a little bit of Cormack McCarthy's The Road because of the close relationship of a father and son left to their own devices.
As a viral contagion, possibly man made is wiping the world out mankind.  Nick, the father, and his son Brian are out on their small 20 acre farm.  We hear of most of this indirectly from ham operator reports, and the occasional fellow survivors that they meet.  The book opens up with the father sitting by the death bed of his young daughter, and with him and his son placing her in grave along side the mother.
The handling of the viral contagion is a little different than in most books.  On the one hand it gives it more emotional weighting than many apocalypse-in-progress novels where a  convenient flue is use as a secondary method to wipe out the worlds population quicker.  However it is not a flu pandemic novel, such as Steven Konkoly's Jakarta Pandemic or Carla Buckley's The Things That Keep Us Here,  trying to convince of the eventual dangers of a hybrid strain getting loose in our heavily interconnected world.
The virus itself is a little improbable, it seems to have spread amazingly quickly, and penetrated all parts of the world equally.  There is no discussion of its transmission mechanism.  Virus's less deadly than 95% tend to be self limiting in their spread.  They kill their host too quickly and burn themselves out before they reach the entire populous.  That is why AIDS is so dangerous, it kills but does it so slowly that it can spread itself.   There is an implication that the survivors are among the fortunate few who have a natural immunity.
In effect, much like the use of an EMP strike, the virus is used to get the collapse going quickly so that we can get on with the survivalist scenario.
The characters are well developed. The son is bit of a whiner at times, but with his life collapsing around him that is somewhat understandable. But in a relative short work it would have been nice if there had been a little more variety in the interactions.  There are some libertarian-conservative leanings within the writings.
Where the book really shines is in the outdoors and fighting scenes.  The author strikes me as one of the few people in the genre who really seems to know what he is taking about.  The issue of point defense, concealment, protection, stalking and tracking are all explored well.  Injuries even from a 22LR rifle are handled well.  The advantage of knowing your home turf are heavily emphasised.  Women, when they make their appearances are not wet sops suddenly willing to do anything to hook up with a good man who will protect them.  There are bad guys wandering around and their appearance livens up the action considerably.
Of course with 95% of the people dead almost overnight you have to wonder why people are wandering around in the countryside.  With so many people dying so quickly, there are going to be literally mountains of foods, and for that matter mountains of guns laying around for the the taking.  Let us take the area I live in, let us say there are 100 houses and 5 people per house.  Only 25 people are likely to survive, and many of them will be children.  There will be at least 75 homes unattended.  Given the amount of gun ownership in the U.S. that is a lot of guns and ammo laying around.  The idea that there is only a couple days of food on hand in a U.S. city is a bit overstated.  A grocery store will turn its common items in that time period, but not its whole stock.  And with 95% of the population being killed off so quickly, the canned food will go much further.   You have comments to the effect that what few police are still alive are protecting their families.  What families?  They are likely all dead.  Outside of the really large cities, a deadly scenario like this one would play out a lot more like the "lone man" amongst the ruins scenario.  Yes there will be some people who will make the other handful of survivors life miserable, but everyone is going to be scattered pretty thinly on the ground.
So what is the net summary?  The heroes are likable, and the villains are generally villainous.   The action is handled well and the tension level is kept high.

To use our descriptive (not qualitative) categories (1 to 7: 7 being highest).  For grittiness, the book is a seven.  It deals with day-to-day events in a very real manner.  There are unfortunate deaths, that are suffered and the emotions linger.  I am tempted to subtract for having the dead neighbor's supplies to draw on, but it is played out more as the advantages of being helpful and caring, rather then free manna from heaven.

For readability, I would give it a seven.  it is a fast paced straightforward story.  Being a novella helps in this category.  The language is not difficult.
Posted by russell1200 at 5:00 AM

Interesting. Is this self-published? Just curious.

Its publisher is listed as Book Surge LLC which is a print on demand house now owned by Amazon.

I am so used to unpolished work (Reflexiones Finales being a good example of such) that I don't notice editorial errors as much as I used to. That being said, the book shows more editing polish, or possibly natural writing skill than most within the genre.