Sigrid Nunez's Salvation City is an apocalypse in progress set in the state of Indiana in near the contemporary United States. 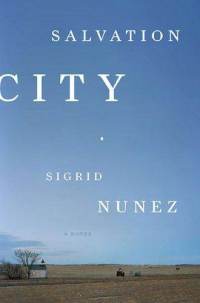 Sigrid Nunez daughter of a Chinese-Panamanian father and a German mother. She was born and still lives in New York City. She is a prize winning author of six novels and most notably a recent biography of Susan Sontag:  Sempre  Susan [Always Susan]:  Susan Sontag being very much the darling of the sixties leftwing movement.
The apocalypse this time is coming from what I am beginning to realize is the literary crowd favorite:  influenza.  This influenza pandemic is based on the 1918 Spanish influenza.  To the authoresses’ credit, she actually gets the multi-wave, with differing levels of intensity, form of the that pandemic down quite accurately.  She does not dwell too much on the scientific aspects, but she does go into a some frightening details of some of the symptoms.  There is a secondary story of global warming alluded to late in the novel, but it is of secondary importance to the story.
The main protagonist of the book is Cole, a young sullen 13 years old who at the start of the pandemic had just moved from Chicago to a small town in Indiana.   The story begins at a point where the boy has been rescued from an orphanage by a Christian couple and taken into their home.  Coles parents were stereotypes of the NPR Chicago-left crowd, the polar opposite of the Christian couple.
The book takes place with a lot of intermingling of Coles experiences during the pandemic, and his current situation in a small Christian community called Salvation City.  Much of the point of the novel seems to be to cross compare the lifestyles of the Christian parents with the deceased atheist parents.
Through most of the book, it is fairly clear that the Christian parents do better in the comparison.  They are less self centered.  They give Cole more guidance.  And in a world where chaos reigns in the cities, the small Christian community is relatively peaceful and calm. The start of the book seems to indicate that the book is going to be dumping on the Christian conservatives throughout, but that one side tone changes as new characters come in.
In the end, although Cole identifies with the love of his Christian parents, he comes to realize (from the books point of view) that their limited world view, limited educational opportunities, and the immediate expectations of rapture are not the world he wants to live in as an adult.  He accepts many of their moral proscriptions, without accepting their worldview.
As an apocalypse-in-progress novel it is an interesting mix.  It is one of the few novels where the main group, Cole and his parents,  is not only woefully unprepared, but does not make that magical last minute grocery run that allows them to survive for six months in isolation.   They keep Cole in school to the last moment that the school closes, and take absolutely no precautions.   As a result, all of them get the flu, and only Cole survives: but just barely. He has some memory loss, and lots of emotional issues.  A sullen boy before he is sick, he is not much better afterword.  Although he sounds somewhat Holden Caulfied-like, somehow that chalkboard screeching personality is (just barely) avoided.
Most of the worst problems are reported indirectly.  There is one strange encounter with a strange group of Deliverance-like characters who are presumably either crooks or survivalists warning Cole and his adoptive father away from one backwoods area.  It is obvious that the authoresses’ charitable feelings toward a Christian community do not extend to people who make advance preparations toward the very disaster she is describing.  We have noted that survivalists are often not portrayed very sympathetically in novels where their preparations would make a lot of sense, so there is nothing unusual in that.
For our descriptive (versus qualitative) ratings:
On a grittiness level, I would rate it a 3 (1 to 7 with 7 being highest).  The fact that the book starts much of the survival aspects of the trauma (parent’s death, Cole’s bare survival) greatly diminishes the impact of the tragedy.  There are also a fair amount of set piece scenes that make for interesting character development and dialog, but seem somewhat unlikely.  That the Christian community can still have an operation insurance office when Chicago is in complete chaos seems somewhat unlikely.  Based on the authoresses’ description, it is not entirely clear that Coles world will survive intact even if the Christian’s expected rapture does not come.  But that is never really brought up as an issue.
On a readability level I would put it a 4.  It is very introspective and dialog driven.  The pace drags at times, and the non-linear timeline is not always helpful.  But it is a relatively short book (hard back at 180 pages) and the language is not overly stylistic.
Did I enjoy it?  It was O.K.  I can see where people gushed over the “boy growing into a man” development parts of the novel.  I did not find these to be consistently compelling.  Cole is so insular and self centered that it is really hard to believe that he is going to be much more than a slightly less insular and self centered adult.  It sounds a little like myself at times, and I don’t consider my life to be great material for a novel.
But it mostly moved along, it mostly was in chronological sequence, and once you realize the author is trying to actually show the strong points of the Christian community it is relatively interesting to see where she would take it.  Certainly the quality of the word-on-the-page was better than your typical apocalypse-in-progress novel.  Someone who was writing a novel on the subject could probably look to see how the literary crowd does it.  Not to copy, but to develop the nuance that seems to missing from the genre.

She does a good job of exploring the weaknesses and strengths of the diametrically opposed world views.  Obviously the atheistic world view has advantages in dealing with the here and now, and in maximizing personal advantage.  But it comes up short when community action, or spiritual strength is needed.  We discussed recently the advantages of the Christians in the Roman Empire's pandemic crises of the 2nd and 4rd centuray, and Ms. Nunez does a fairly good job of highlighting those advantages.
Posted by russell1200 at 5:00 AM

Man I love your book reviews. Now if I could ever read some of these anywhere near as quick as you write the reviews I would be in hog heaven.

When it is time for a new book I now refer back to your reviews before buying.

Keep up the good work!!!

I write the reviews as I read them, and then save them until I have a group of 5+.

I have found that one-at-a-time reviews don't seem to have as much impact, and also makes it harder for me to keep up with the reviews.

Since the book reviews usually take a little time to write, this of course means that while I am writing them I occasionally get in some time pressure to write the regular posts.

One way I get around this is to cut and paste links into "draft" posts and save them with (idea) or if I do a little on it (start) at the front. That way I can go back latter and finish it with a little less time needed. When you see a post with the idea or start in the title it means that I forgot to delete that portion before publishing. I usually catch the mistake pretty quickly, but you can see it in some of the URLs which don't change if you edit the title.