ht The Apocalyptic Post
Lori Nix, originally from western rural Kansas and now in Brooklyn, NY, has a pretty strong online presence (Google Image her and you will see).
Here is her website,
and here is a video of her discussing her work. 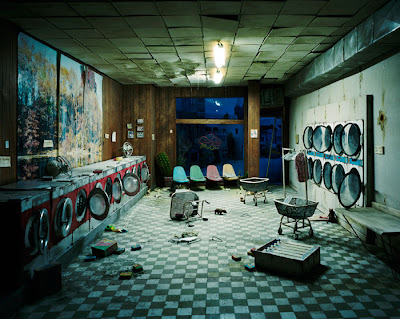 I am interested in depicting danger and disaster, but I temper this with a touch of humor. My childhood was spent in a rural part of the United States that is known more for it's natural disasters than anything else. I was born in a small town in western Kansas, and each passing season brought it's own drama, from winter snow storms, spring floods and tornadoes to summer insect infestations and drought. Whereas most adults viewed these seasonal disruptions with angst, for a child it was considered euphoric. Downed trees, mud, even grass fires brought excitement to daily, mundane life. As a photographer, I have recreated some of these experiences in the series "Accidentally Kansas".

In my newest body of work "The City" I have imagined a city of our future, where something either natural or as the result of mankind, has emptied the city of it's human inhabitants. Art museums, Broadway theaters, laundromats and bars no longer function. The walls are deteriorating, the ceilings are falling in, the structures barely stand, yet Mother Nature is slowly taking them over. These spaces are filled with flora, fauna and insects, reclaiming what was theirs before man's encroachment. I am afraid of what the future holds if we do not change our ways regarding the climate, but at the same time I am fascinated by what a changing world can bring.

Her images are beautiful. Thank you. Interesting how she takes scale train materials, i.e. toys, to make pretty images she can control of a post human world (toys, innocence restored?). It is an impulse for contemporary artists to seek beauty in decay and a worthy task.

Wanted to mention this English fellow from the 1500s because he was doing just the opposite. John Dowland lived at the height of the Renaissance (IMO with beauty more available in the art, music, architecture, and farms of his time), and his music and lyrics condemn beauty and light (very beautifully I might add)

The final stanza from his ayre "Flow My Tears":

Hark! you shadows that in darkness dwell,
Learn to condemn light
Happy, happy they that in hell
Feel not the world's despite.

Why does he condemn beauty and light?

I think that Ms. Nix is entranced with the "World Without People." She speaks somewhere about the bleakness of the imagery of her youth: but many of her settings are urban, and she lives in about as urban of a setting as you can within the U.S.: Brooklyn.

That she builds each setting for only one shot and then tears it down, works a little bit against the "world engineering" motif.

Ann Rice and her vampire setting were a lot about beauty and darkness. So I think you are correct about that impulse.

But I must confess that her exact logic eludes me.

That she builds a world and then tears it down on purpose to simulate decay strikes me as a way for an artist to congratulate and be involved in what they sense is inevitable, or at least very likely. At least that is what I take away from it. And to be involved in something that one senses might be "evil" then makes one long for innocence, and so therefore it makes sense to use doll furniture and scale train materials. Sorry to repeat myself. Not the clearest communicator I.

And that vampires have become more prominent in our culture as of late is of no small significance. A psychologist friend of mine insists that Brahm Stoker's novel is a metaphor for a certain all-too-common violation of innocence, whereby the perpetrators reproduce their kind through victimization, and meanwhile nobody acknowledges what is happening until it is too late.

Once you can corrupt a person's innocence, controlling them becomes easier. It get's hard to pin this down, but really that is what's happening to our culture as a whole. So some survivalists look forward to a "reset" through destruction, chaos, and a resurgence of wild nature. And so Ms. Nix is doing the same with beautiful imagery, reclaiming innocence.

Werner Herzog's 1978 Nosferatu really ties these themes of civilizational decline and loss of innocence together very well, as does his art film Fata Morgana (albeit in far more abstract form).


Glad you liked Dowland. Probably rings a bell once you've heard it, but thanks to Youtube old gems like this can now get their deserved spot in the sun for a moment centuries later.

"Why does he condemn beauty and light?" you asked.

Not sure if you were asking me to show clearly this is what the lyrics say, or if you were asking me why you think he was in the mood to be so bleak. To me the lyrics are self evident, so I will assume you where asking why he felt the way he did. I would guess that his heart was broken by a cheating woman, as that seems to be a recipe for getting a noble man to hate the world for a while in my experience. Incidentally, women who have been abused in their youth tend to cheat more, and so we tie back in to the modern Vampire obsession.

Clear as mud no doubt.

Thank you, I see better what you are saying.

You guessed the correct question. I just thought you might know, some such things can be common knowledge or they can be a complete mystery.

Does not explain it, but he reminds me of Christopher Marlowe in so far as the Catholic versus Protestant spying in Elizabethan England.

I also read his book on Sir Walter Raleigh and his South America expedition. It was not as intense as the Marlowe book, but interesting none-the-less.

Oh holy schnikes! I followed up on Marlowe on web sources and he fits in with this long thread I've been following where I want to explain why there are so many brilliant early 20th century literary figures who were also agents in British intelligence. (e.g. TE Lawrence "Of Arabia", George Orwell, Graham Greene.) What bothers me is that each of these men's works are very important to me, yet anything I've learned about the history of British Intel is Evil with a capitol "E".

...And now you pull out Marlowe: "All they who love not tobacco and boys are fools." I recognize my paranoid brain is too quick to generalize patterns and assign intention, but there is something here to spies using the nastiest of corruptions to do their jobs.

This turns into a rabbit hole, and I spent all of July, August, September, and October down there finding some really rotten old fruit. I started down this path today while looking at Ms. Nix's beautiful artificial images... No more blogging for this paranoid until I've got this spring's planting planned out well. Good thing there's still snow on the ground so I don't feel too late and lazy.

It seems kind of obvious. The British felt that good writers made good spies. That sometimes good spies make good writers (John le Carré is a latter example) does not prove the point, but is certainly indicative.

A spy has to be able to imagine an alternate world from the one that he sees in front of him/her, and has to hold that alternate possibility while running through various permutations. Sounds like a good start toward being able to write.

Catholics within protestant England were particularly valued as they were able to penetrate the various Catholic groups who wanted to harm the monarchy.

In addition, while they may not be as twisted as comedians, writers as a group do not strike me as necessarily the nicest of people. They have a lot of excuses made for them, and some of them can be nice. But I would not say it is a necessary condition.