O.K., Hopefully that was not too painful.
I am not an experienced writer of fictional accounts.  But this exercise would not further my experience much, as little of it was fiction.
The battle actually happened:  near Dilley, Texas in 1865.  The Guatemalans were Comanches.  I replaced the initial person attacked with a  young lady, and gave her portions of the accounts more depth to give it a more post-apocalyptic  feel.   I accidentally changed the Captain's name from Levi Ed.  Ed was Levi's younger son.  He was too young to be part of the action and latter became well known himself.  I gave the Guatemalans crossbows, which can be used from horseback, rather than bows.  Much like bows, crossbows would not require gun powder and outside supplies.  If they don't have to be strong enough to punch through mail armor, they can also reload fairly quickly.  Not important here, but when they have very sharp points they can negate the effect of kevlar type (soft)armor.   I thought about adding woman to the posse roster, but decided I was already getting a bit complicated.
The account I used was from Texas Indian Fighters by Andrew Jackson Sowell written in 1900.  It can be found (free) at Google books.   In the online version I have it is found starting on page 268.  A cleaned up account is found within Gregory and Susan Michno, Forgotten Fights: Little-Known Raids and Skirmishes on the Frontier, 1823 to 1890, Mountain Press Publishing, 2008.  It is one of the engagements that can be found online: link.
As for Martin, Texas:

Martin Texas was a frontier settlement on Todos Santos Creek at Todos Santos Lake near the Leona River, fifteen miles northwest of Dilley in southwestern Frio County. Early accounts place the lake on the old road from Pearsall. The settlement was probably named for the Martins, who were among the earliest settlers of the community. The area was probably settled in the mid-1860s and attracted cattlemen and horse traders. Mustangs roamed the area in great numbers at that time. Todos Santos Lake, described as 1½ miles long and sixty feet wide, became a much-used watering hole for thousands of longhorn cattle and mustangs. At one time a saloon operated at the lake site. 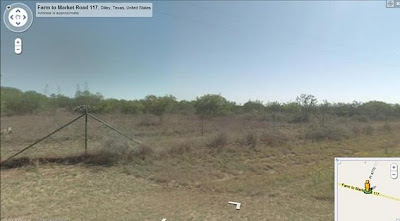 Looking through a relatively open road side area near Dilley Texas in the general area of the action.  Based on the account, there were not a lot of trees, but it was not a completely open flat grassland either.  Riders mounted on horse would be able to see over some of the low scrub, but they would make maneuver a little chaotic.
So why did I go to the trouble?

Because you here endless discussions online about modern skirmish/survival fighting and tactics that appear to be based on either video games, modern military actions, or imagination.  I just saw a post online where the author is going to use a 1990 magazine article on special forces patrol tactics as a basis for discussion.  I know the article he is talking about and have a hard time figuring out how he is going to make most of it relevant.  More relevant are hundreds of accounts of skirmishes, between non-military civilians or military with only light arms and the native-Americans, that are much closer to the situation being discussed.
To illustrate the point:  They had rifles that back then that could easily take people out at 300 yards.  Did anyone in this fight use a rifle to take someone out at 300 yards?  Why not?  Well because they were fighting on the fly, riding horses, and the targets were moving enough to make those shots difficult.  The people involved were familiar with firearms, but were not comfortable taking those types of shots.  Should they have dismounted and shot at them from 200 yards with the their long guns, rather than dashing up to them?  It would have worked better then what they did.  Should they have spent a little more time preparing for their mission before they left to hunt indians, and brought more ammunition - obviously.  But that is the point.  These are real people, going about their real lives, not a marine squad scouting down a trail.
I don’t want to run on too much longer, so what are some of the lessons?:
·         Firing while moving  is inaccurate: even more so on horse and from range.
·         Not a huge factor here, but scouting and tracking are valuable skills.  Awareness of the possibility of being tracked is important.
·         Having a functional vehicle or healthy horse makes escape from a bad situation much more likely.
·         Avoid fighting with experienced combatants unless you have surprise or some other major tactical advantage.  Certainly avoid it if you are outnumbered.
·         Bows (and crossbows) are very dangerous.  Maybe not as dangerous as large caliber (.308+ rifles) but dangerous none-the-less.
·         Raiding parties are often going to find themselves outnumbered by their targets.  Unless they are entirely parasitic, which is hard to pull off, they must leave behind the people who get them their food supplies.  Even if they have other sources of food, they are not going to bring anyone but the most fit with them.  However, with modern firearms, anyone who can hold a gun, even a 22LR, is a deadly combatant.  So the raiding party in our story, may have equaled or exceeded the number of able bodied men/women in the area.  But they probably did not outnumber everyone who could shoot a gun.  Thus there was no effort to attack the settlers with the small force.  This was true back in 1865, and would be true today.
Posted by russell1200 at 5:49 AM

Seems reasonable to hold fire on the fly certainly, especially given in this situation there could be difficulty obtaining replacement ammo.

Drilling is something good athletes know the value of, and might have really helped the girl's camp in a situation like this. Costs $0, builds teamwork, ensures overall readiness, can be fun-ish.

Could it be that in the old time account on which this story's based, you had more aggressive pioneers than "survivors" might be, on account that pioneers were of an expansionist mindset, and desired extermination in addition to home territory defense?

Now if somebody in the settlement had squirreled away (and armored) a good 60ft boom lift (diesel) or a 40ft boom lift (electric), they could have taken advantage of their rifle's range. The boom lifts can 4x4 pretty well in the down position. The scissor lift would need at least a gravel road and nearly level terrain.

Ah, but I can't even afford bus fare today. The scrap yard stopped paying cash and now mails a check on a 1 week delay. Ha! Nothing to see here. Recovery under way don't you know? Move along...

I doubt the scrap yards make much on the float. It may be a way to avoid problems with their employees.

There are so many what-ifs with these types of accounts you really can go on forever with them. It may have not been all that clear, but based on the geography sited; they were well away from town, so I don’t think the tower would work. The town then, and the remnants now, did not have enough manpower to keep a standing watch. Or at least they choose not to. Certain parts of the story lead you to believe that direct Indian confrontations were not that common in that time and place.

From the account the Texans are very aggressive. From other accounts, that seems to be the usual case. A lot of them were Scotch-Irish from other places in the Southeast USA. However, these accounts do have the usual problems with survivor bias. The dead Texans left no tales. Whether "post-apocalyptic survivors" would be that aggressive is of course unknown. It would not surprise me if ranchers were. Risky occupations tend to draw risk takers.

They had at least a two hundred yard shot on a relatively large target moving away from them. It is obvious that neither side viewed wounding shots on horses as their best first option (we are not talking 5000 longbow men at Agincourt machinegun-bow firing on a mass target in a restricted area) and they were anxious to not let them get away. The one experienced person tries to hold them back from charging. The Indians, no doubt, were pleasantly surprised not to be facing a larger group.

As I noted a long time ago, the plains Indians unlike the Eastern counterparts were not known as crack shots.

It is likely that the Texans were using an inexperienced version of the typical confederate cavalry method of the pistol/shotgun charge. Unfortunately for them, they started their charge to far away, and their shooting much too close. In this battle neither side was given to long range sniping. It seems like an odd limitation to willingly accept: but that appears to be the case.