When the Levee Breaks

…Ain’t Got No Place to Stay

The massive clay levee that has protected this steel town from Mississippi floodwaters for nearly six decades is 52 feet high and so wide that a two-lane service road snakes for miles along its crest… By the end of next year, Granite City and the rest of the American Bottom region across the river from St. Louis will be labeled a special flood hazard area—essentially erasing 75 miles of levees because the government says they can't be trusted anymore.
The embankments will remain standing, but any home or business with a federally backed mortgage in the 174-square-mile area will be required by federal law to carry flood insurance.

Typical of the WSJ that they focus on the new sales tax to do (somewhat remedial) repairs, and the cost of additional insurance rather than the cost if there is a massive blowout of the levee.  Granite Falls has an estimated 14,000 housing units with a median (in 2000!) value of $56,800.  So we are talking about $795,200,000 in market value.  Now I had a hard time finding a number for St. Clair County in which East St. Louis resides.  But using the same ratio of poplation to housing units would come up with 13,000 housing units.  Since we know East St. Loius is a little rough, we will give them half the median value. So East St. Lois would have $369,200,000. 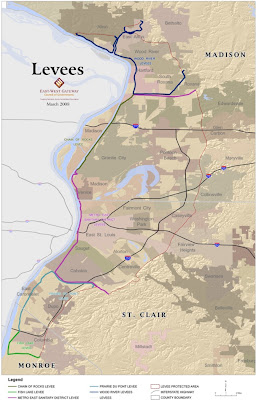 Louis/Granite Falls Levee system: Levees Fall of Face of  Map (paywall likely).
In the Area of Madison County (Granite Falls) and St Clair (East Saint Louis) there are 81, 257and 86,419 employed from a population of 262,291 and 268,078 respectively.  The per capita income for Madison County, IL is $20,509 and for St. Clair County, IL is $18,932.
So in a (very) back of the envelope exercise to get some idea of the scope of destruction if these massive clay levees blow out:  you have about $1.2 Billion in homes, and $10 Billion in annual income at risk.  And this is just the tip of the iceberg.  The cost of damage to two large cities commercial districts, and utilities would likely (given the low residual property values) be double that amount if repair/rebuilding was attempted.  If you try and make a rough analog to Katrina and New Orleans you could easily come up with a $5 Billion in damage if the event was sudden and catastrophic.
Posted by russell1200 at 5:29 AM