A recent series of studies,  An Assessment of the Extent of Projected Global Famine Resulting From Limited, Regional Nuclear War by Ira Helfand, MD , and  Climatic consequences of regional nuclear conflicts by A. Robock1, et al, has begun a discussion of the possibility of sufficient global cooling to cause massive hunger and famine and possible follow up of pandemic diseases that follow the weakening of the population.  This is not the all-in global freeze over portrayed in the Carl Sagan mid-1980s scenarios, but more of a “just like Krakatau” scenario.


Because they know (sort of) the effects of explosive 1815 Krakatau explosive 1815, they have based their model around the idea of setting up a nuclear event/scenario  to  Krakatau.
There are a couple of problems with their scenarios:
·         To get Krakatau equivalence they model for “as few as” 100 15kt Hiroshima-sized bombs:  50 being used by each size.  The difficulty here is that within their limited war scenario, the are only a few likely participants.  China and India have enough bombs with enough range.  Israel has enough bombs, but not enough range.  The British, French, Americans, and Russians have enough bombs, but are likely to use a lot more than the scenario calls for: thus making the concern of even limited usage moot.  The rub is that Pakistan, and North Korea do not appear to have enough bombs to get to the 50 bomb total.
·         They also state that these bombs are directed at urban centers with their very heavy fuel load being added into the cloud plume.  This makes the 15kt notation somewhat moot.  But it is unlikely that even the majority of any countries bombs would be directed at population centers.   All of the likely fighting powers in this scenario have very large armed forces that will take at least some of the bombs and missiles.   Air fields will also be targeted in the hope of catching some of the bombs on the ground.
·         For cloud dispersion and continuity, the war is postulated to occur in the subtropics.  This would dampen the strength of a North Korea (with presumably US response) scenario.
What is to like about the scenarios:
·         They are using historical examples of events that did occur, Krakatau, the Bengal famine of 1943 to model the event.  While far from perfect, they are likely to give some more rational bounds for what may occur rather than taking small events (like distant EMP events) and scaling up.
·         Some of their modeling is applicable to far more scenarios than simply an exchange of bombs.  A temporary shift in climate (as occurred in the 1890s), or another mega-volcanic explosion would also bring similar scenarios.
·         Finally, it is fairly obvious, that more countries will attempt to get nuclear weapons, so over time the possible scenarios will increase.  Further, retaliatory strikes on behalf of super power clients also become more likely: US versus Iran being a very likely one.  However, as a non-regional antagonist, the super powers would have less interest in going after population centers.
What is some of the possible “fallouts”
·         Global grain stocks have been trending low over the last decade.  They are often closer to the 50 day level, versus the 100+ level more common in the 1990s.  The ill effects of Krakatau were alleviated by extremely strong harvest in the year prior to its occurrence.  With the shifting toward using food as fuels (ethanol) we are not likely to have large reserves on hand.
·         As Helfand point out, when there is a sudden threat to supply, hording itself will often cause the supply problems.  Three million people died in the Great Bengal Famine of 1943 the food supply only dropped 5%.  But the Japanese had conquered Burma and eliminated the possibility that there would be “make-up” shipments from this source.  This caused food to be priced beyond the range of many people.   In a global panic (as recently happened with wheat) many countries are likely to shut down exports to other countries.
·         Note that this cooling is probably not going to be all that helpful with regards to negating global warming as much of it is coming from directly blocking the sunlight.  A warmer globe might reduce some of the frost damage, but the temperature cool off will be much greater (-1.25°C versus +.7°C) than the last centuries warming, and it is hard to get a lot of photosynthesizing without sunlight.
·         The effects of radiation and fallout are a bit sketch to predict in such a loose scenario.  However, it is very possible that any famine will be exacerbated by crop lands being poisoned by fallout.
·         In some scenarios, oil producing countries will be effected which will cause a drop in oil production, and further direction of food to fuel. It should be recalled that at the maximum drain down rate, it is very possible for the US Armed Forces to use all of the strategic reserves available if there is a war going on.
There are an estimated 800 million people worldwide who already suffer malnutrition.  Five million children die from malnutrition even in a “normal” year.  These people very likely will be priced out the market and are very unlikely to survive.  With something as large as a 10% drop, many more if not killed outright, will become weakened and subject to famine.  Famine after Krakatau lead to an outbreak of typhus in Europe in 1816.
Commodity markets are very thinly traded compared to their underlying markets.  Shifts of money out of one sector of finance (holders of debt) into the commodity can have oversized effects on pricing.  The suspicion that Goldman Saks was behind the recent run up in oil pricing were not completely fantastical hypothesis.  The multiplicative effect of a globally connected world finance added to the usual effects of hording allow the possibility of exception fast and large price swings.
And in a market economy, if you have enough money, you have don’t have food. 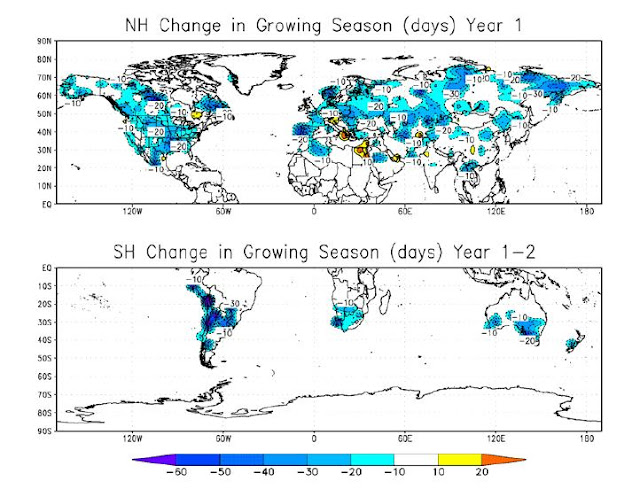