Surviving the Lunar Eclipse and Solstice 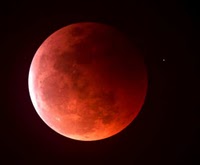 As a coincidence, the eclipse fell on the same date as the 2010 winter solstice. The last lunar eclipse to happen on the day of the winter solstice was in 1638.

And 1638 was the begining of the end for later day feminist heroin Ann Hutchinson.  An independent thinking woman who disagreed with the stifling Utopian thinking of the John Winthrop and the Massachussetts Bay Colony, Anne was bananished on November 8th , 1638 from the colony.  At the time of the last lunar solstice Anne would have been enroute to her newhome on the island of Aquidneck.  A few years later Anne, her servants and 5 of her children were massacred by Mahican Indians in East Chester New York.

For the CNN one minute (plus a short introductory commercial) version link.
Posted by russell1200 at 7:59 AM