I made the mistake of starting my Christmas theme too early and was running out of ideas.  A lucky trip to wiki and the real Saint Nicholas (versus Santa) entry saved my bacon.  Cannibalism and famine are popular themes in post appocalyptic speculation and literature, and I am going to be dealing with some of the factual elements in some later posts.

But for now we are going to present the actual legend of Saint Nicolas and the Cannabal with a lot of help from Wiki and the excellent Saint Nicolas Center website.

The story tells how a terrible famine struck the island and a malicious butcher lured three little children into his house, where he slaughtered and butchered them, placing their remains in a barrel to cure, planning to sell them off as ham. Saint Nicholas, visiting the region to care for the hungry, not only saw through the butcher's horrific crime but also resurrected the three boys from the barrel by his prayers. (wiki)

And there is a popular song about one version of the tale:


This popular French song, the Légende de Saint Nicolas, dates back to the 16th century and is still sung by French children today. It tells the rather gruesome story of St. Nicholas rescuing three children from an evil butcher. The story, which was originally of three young men—traveling scholars, is told in France of three young children (see illustrations from 1935). Here on this page, they are shown as older children by 19th century artist E. de Liphart. Music and an English text, freely translated by poet James Henry Dixon, follow the original French. (Saint Nicolas Center) 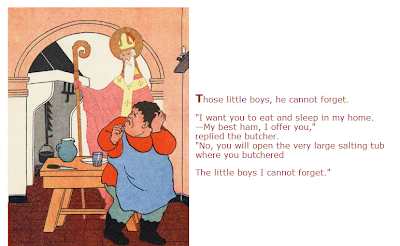 Saint Nicholas and the Cannibal, in the original he raises the "prepared" children back from the dead.
Posted by russell1200 at 12:11 AM