Under A Graveyard Sky: A Review

John Ringo's Under a Graveyard Sky is his entry into the "realistic" zombie-apocalypse.  By realistic, it uses about the only sensible way you might get a real zombie-apocalypse, through bioterrorism. The book is the first of the four books in the Black Tide Rising series. 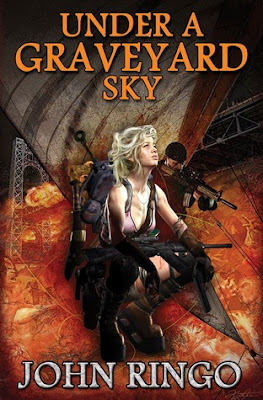 John Ringo is famous in what I would call the modern version of the men's action novel.  These seem to have adopted their tenor from Tom Clancy's well researched near future, military-clandestine based stories.  In the case of Mr. Ringo, much of his work fits within the Military Science Fiction genre.  It is not a genre I have read much, but for the reading male populace, I would call it a welcome change from the earlier pulp fiction violent-sleaze-soft porn that dominated up into the early 1990s.
So what you get is a lot of detailed research on what is mostly a bunch of either utter nonsense, or over analyzed drivel used as a way to make the rock-em-sock-em shoot up combat story seem plausible.  Improbable in this case refers to the fact that two of the main combatant-protagonists, even though their parents are healthy and still around, are teenage girls.
So the quick run down.  Prepper, Australian special services father lives in United States with wife and two teenage daughters.  He gets special advance notice of coming z-apocalypse from secretive sources, goes and buys a boat with money conveniently given to him, and then, after a very strange trip to the least safe environ you can imagine, New York City, starts on a nautical, apocalyptic journey off the East Coast of the United States.
The tone of the novel is that of, in this case mostly unearned,  self-righteous heroics, sprinkled lightly some anti-Obama/Democrat Party digs,  counter poised with an insanely pro-military, libertarian-right version of reality.  A world view that I suspect is very popular with the military folks that a lot of these books are no doubt sold to.  While it is not a viewpoint I see that often in my readings, I find preachy self-righteousness annoying in general, even when it is closer to my own version of reality than most.
I did find the heroics of the teenage girls highly annoying.  I happen to know a fair number of athletic, very educated young ladies in their age range and none of them could even come close to pulling of the heroics they are capable of.  The author greatly underestimates the learning curve in trying to pull off sophisticated maneuverings of boarding actions, and small combat units at sea.  The odd sexual overtones used when describing the younger tom-boy daughter is particularly creepy to my mind.
So I was not thrilled with the novel.  But I am ambivalent.  The heavy research involved does mean you get to learn some interesting factoids along the way, and for some reason, I have a particular fondness for novelistic  high-seas escapes from the apocalypse.  I think a lot of folks who like the action adventure type of prepper-porn, will really like it.  By the standards of that genre, much of the goings on are very realistic.
We now come to our two descriptive (not qualitative) ratings: 1 to 7 with 4 the mid-point and 7 high. Realism does not include the cause of the collapse or apocalypse, but is otherwise an assessment of how close to today's world is the setting. Could you imagine your friends, or families living through the situation. Readability is not literary merits, but literally how quick and painless of a read.
It is set in the near future (a plus), it is zombie-novel (a minus because the zombie issue doesn't go away), the hero-family has access to all sorts of ridiculous intel and money (a minus), they do worry about ammo and such ( a plus), there are issues of intergroup bickering (a plus) .   So I will call it a six on the basis of the extensive research, even as I noted that the overall tone of the story is not always plausible.
Readability is tough.  There is a lot of action, but there is also a lot of talking, and arguing, and the story line takes some extended detours before we get to our boat bound excitement phase.  So it's not a page turner, but not a complete boar either.  Unless you think mild jabs at Democrats count for literary symbolism, it is pretty much an on-the-surface story.  Call it a six.
Posted by russell1200 at 7:00 AM

I always liked Ringo, although he is a bit repetitive ( I'm a lot more critical now than when younger, as far as sci-fi realism ). So I got REAL excited when this came out. Even bought new rather than waiting for price decrease. Even bought the paper version rather than Kindle. If I had read this Ringo book before his other ones, I'd never have read further. Your review is pretty spot on to my views. Unless you can buy at a discount, I'd skip this. I won't buy another one in this series, even at a penny plus shipping. It is just like Turtledove and the volcano eruption series. Great author does mediocre crap. Heavily researched, sure. If you like the SWAT Assault Porn. Of course, sorry, that is my semi-auto bias oozing through.

Pioneer: Yes, unfortunately not all in good ways.

James: LOL! His publisher, Baen Books has a small office in the Town of Wake Forest (not to be confused with the University which is in Winston Salem about 2-1/2 hours west) so I sort of wanted to read one from one of their top writers. I gather from reviews that a lot of the issues brought up in this first book are never really explored. It's just more kiddy heroics.

I have been reading Turtledove's first Volcanoes book. Possibly because I know of the complaints, it has been o.k. so far. It seems more like a take on the collapse of our current world as seen through a dysfunctional family than a volcanic adventure.