Find Me: A Review

Laura Van Den Berg's Find Me is a pandemic apocalypse set within a malaise filled falling apart modern world. It is a the coming off age story of a young girl, who catches the usually deadly disease , and is shipped off to an odd medical research facility in Kansas. 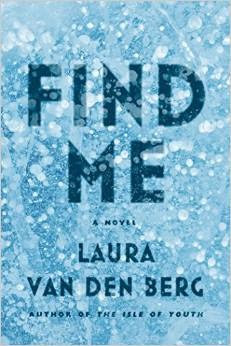 Laura Van Den Berg fits in that mold of up and coming young writer.  She was raised in Florida and lives in Boston:  two areas that do feature in the story.  Her previous books had been short story collections.
Joy is an ironically named young lady who grew up in the foster care system in Massachusetts.  She is struggling with dead end jobs, loneliness, etc. when a plague sweeps through the country.  The first signs of the plague include memory loss, which is used as a literary device set against the difficult memories of our heroine.
It is a difficult story to review without giving away too many important plot moments.  There is a little bit of a medical thriller going on, along with some episodic short-story-like tales interspersed throughout the stories main theme of the young lady trying to find herself.  The plague, the weird medical story, and the depiction of a country slowly falling apart, is very well done.
All of which sounds great, except that the author has a less than straightforward delivery, and their is a fair amount of poorly explained oddness.  It has an odd disjointed, trippy sort of feel that diffuses the storyline into more a muddle of confusion, than a heartfelt story of discovery.
So I while I liked certain parts of the story very much, in the end I was disappointed.  A lot of modern readers seem to like overly confused story telling, and a coming of age stories are also wildly popular.  So combining those two elements guarantees that it will get some positive review.  But I don't think the payoff of the novel justifies the effort.  I would call it a near miss.
We now come to our two descriptive (not qualitative) ratings: 1 to 7 with 4 the mid-point and 7 high. Realism does not include the cause of the collapse or apocalypse, but is otherwise an assessment of how close to today's world is the setting. Could you imagine your friends, or families living through the situation. Readability is not literary merits, but literally how quick and painless of a read.
You have strange trippy-ness, intermingled with a fairly realistic portrayal of surviving in a collapsed economy with a very realistic portrayal of how a deadly pandemic might actually play out.  I think the trippy-ness does effect some of the realism, but mostly effects our next category - readability - so I will say its realism is a six.
Readability is mixed.  There is a plot line, and some elements of the plotline do move forward, and have a fair amount of resolution. But there is a lot of odd sub-stories along the way, and not all the storylines are resolved cleanly.  The symbolism is a little heavy handed at times.  So I will call it a literary 3.
Posted by russell1200 at 7:00 AM