Men are stronger than women

I am not going to make a huge deal of this one, but I thought with the prevalence of the Hunger Game-style combative post apocalyptic (or at least dystopian) female warriors, to point out that it is not a good idea of women to rely on matching physical strength with men in real life deadly conflicts.

What we are talking about is our forearms. That is where the muscles we grip with primarily come from.  The group tested is between 20 and 25 years old. It all comes down to one chart: 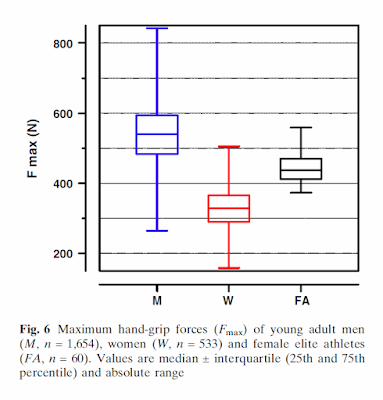 There is a lot of anecdote evidence that shows that athletic men blow athletic women off the charts in strength, but I think most people are surprised that even average men are stronger than athletic women. Particularly when the athletic women were highly trained in sports (judo, handball) that required hand strength.  As they noted"  "95% of the females produced less force than 90% of the males".

This isn't even close to the fictional portrayal, and I think when it gets to be that out of sync with reality, there is a strong potential for a dangerous miscalculation of abilities.  It is not as if women are not good at all sorts of other things, why the emphasis on an area where they are mismatched?  That seems like a perverse sort of boosterism.

Russell - anyone who has done co-ed basic training would already know this. and it's basic common sense. but we had to do grip tests for our physical fitness tests each year and the girls always scored way lower than the guys. i know of only one girl who i would say was as strong as the guys. that was through my whole 10yr career.

And yet they still got title IX passed so we can spend more public money on the weaker women....

Kymber: Yes, but you couldn't tell that to a lot of folks.

Pioneer: Title IX is a strange animal, no doubt about it, but I don't think this is a particularly strong argument for being opposed to it.

You can't tell that to 99% of folks, Russell. All hail the PC false idol! Glad to have you back.