The Western Front: A Review

Archer Garrett's The Western Front is a near future apocalypse-in-progress set within a United States that is collapsing economically, narco-bandits are causing trouble on the Texas borderland, and there is a rumors of succession in the air.  The book is the first of a series of planned novels. 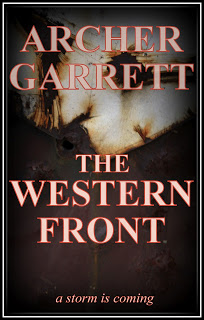 The author describes himself as a Christian conservative-libertarian who likes outdoor activities.  Based on his novels locations, he seems to have a connection to Mississippi, and the Gulf Coast in general.   His libertarianism comes into play in so far as the over-regulation and over taxation of the commercial enterprises is stated as a primary cause of the current economic collapse.
The novel is the story of an economic collapse combined with a certain amount of action-adventure spy novel as various enemies of the United States engineer a collapse of the country for their own purposes.  We visit a variety of folks along the way.  There is a whole bunch of Texas State National Guard with a some Navy SEALs (improbably) thrown into the mix, an over the top evil anarchist, a Libertarian Republican who is trying to run a political campaign in the middle of a full blown national collapse, a CIA Master Spy, and a Family of outdoorsy Christian sorts (one of whom is a Navy SEAL) who live in rural Mississippi.
The novel is a compilation of oddly thrown together conversations mixed with entertaining moments of pure action-adventure.  By odd conversations , I mean you have long discussions from an experienced politician about his near messianic respect for George Washington, and our outdoors family discussing odd quotes from the Biblical prophecies of Habakkuk.  By pure-action adventure I mean set piece shoot em up encounters where the good guys are always smarter, faster and slicker than the various bad guys.   Occasionally the good guys just have better equipment, but mostly they are sneaker.  Bad guys (probably realistically) do a poor job of keeping up their 360-degree security.  Good guys, maybe not as realistically, are always in position to exploit their errors.

The novel works reasonably well as post-apocalyptic military porn without (at least not in this first book in the series) becoming one of those insane militia novels where the re-invention of the Molotov cocktail leads to the downfall of modern military systems.  It is obvious from the moments of biblical discourse, and George Washington homilies, that the author is trying to push a certain worldview toward the reader, but the chaotic nature of the novel tends to tone down the impact of that discourse.  It comes across more as people with opinions than particularly effective rhetoric.  The free market mantra has long turned into something closer to a religious conviction for many people, so its not surprising that the arguments are stronger in their conviction than in their substance.   There are almost no female characters of importance, or for that matter of noteworthy competence.  In some of the military settings that is somewhat understandable, but it is generally true across the board.
Did I like it?  It was o.k.  I was registered as a Libertarian at one time so its not as if those views are anathema to me, and while the Christian-themed discussions were not always well placed, but they were short and not as in-your-face as I have seen other places.  They did bring up my favorite conundrum of "What do you do when you find your neighbors 8-year old daughter stealing from your survival garden?"  The problem though, is that I tend to like action shoot em ups if they aren't too long.  So its difficult for me to really recommend it to a wider audience.  I suspect most people will find it a little chaotic, and a little odd.  My suspicion is that it is going to turn into more of a militia-style novel as the series progresses, and I tend to find those dull.
For our descriptive (versus qualitative) ratings:  1 to 7:  4 is the midpoint, 7 is high.
Realism is mixed.  Yes there are survival situations, but most of them involve gun play rather than real supply/water problems.  As is common for these novels, the collapse is rather uneven.  It is not clear why there isn't even more problems in the cities as, based on the descriptions of the state of highway transportation, just about everyone should be starved to death by now.  The author seems to have the common, antiquated concepts about the urban-suburban-countryside lifestyles.  The urban folk are not treated well here, and the suburban folks are mostly absent.  There are almost no random people on the roads - just bandit types.  The prepper types all seem to have a lot of money and time to set themselves up.  The effects of nuclear terrorism are noted as a voice over on a news commentary rather than personally witnessed.  I will say it is a 4.
Readability is a little bit more straightforward.  There is too much extraneous chatter to call it a page turner, but outside some biblical discussion, there is almost no heavy layering of symbolism, or extended navel gazing to slow up the storyline.  It is a 6.
Posted by russell1200 at 5:00 AM

Thanks for the review. I can understand your gripes. I did purposely inject my ideals, but tried to rein them back to avoid preaching.

I'm glad to see that, as someone who's ideals are probably somewhat different than mine, you didn't throw the book against the wall.

Archer: Ideally you want to demonstrate the differences rather than preach them. But it is hard to get the balance right when you have such an extended cast of characters. I book that simply focused on Texas and MS and the limited knowledge of what was going on would have allowed a little more time to realistically address their world views. But the desire to have characters that are both good (as in moral) and also successful tends to also get in the way. After all one of the reasons that the Jews were looking for a Mesiah was because their dedication to God did not seem to lead to worldly success for Judah/Israel. The Son of Man was thought by many to be the answer to that. From people who are knowledgeble on such matters, traditional African American understanding of Christianity also does not attach much in the way worldly positives to the saving grace of the Lord.

In hindsight, it should have been 2 books. I may one day dissect the story arcs. 1 book could be - Jake/Clay/Senator and the other could be Barrett/William/Reese

Kratocracy (the sequel) does this. There is the border, the tex governor and a new arc in georgia. William and Jake (and crew) and the presidential candidate are absent, for one reason or another.


I don't want to hijack the post with theology, but to know Christ is to suffer. He set that precedent, and the vast majority of his disciples met their end at the edge of a blade or on a cross. The ones who weren't martyred were exiled.

In 1Samuel which is mentioned by Claire in the book, israel cried out for a govt like the rest of the world. They were warned, but ignored it. That set in motion much of their problems.

The 1Samual period is the period after the collapse or major pull back of the Mediteranian Empires. It is valid that David setting up his little kingdom in the middle of the hills, made the area worth concquering when the Empires recovered and returned. First the Assyrians took Israel, and then the Babylonians a bit latter took Judah.