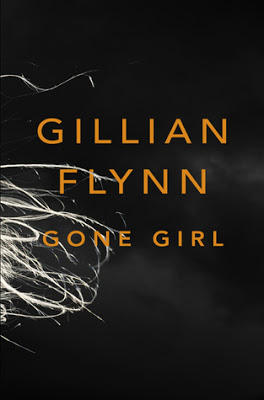 Gillian Flynn writes novels that sell very well.  People like them a lot.  Gone Girl has shot her into the stratosphere by being able to fit both within the popular genre of contemporary fiction, and getting rave reviews by the more artsy folks out there as well.
The start of the story is rather simple.  Husband and wife are about to celebrate their fifth reunion.  In what is an apparent break in, the wife is grabbed and taken off somewhere.  The story begins as a who done it, questioning both the motives and emotions of the husband, and the missing wife through her diary.  Because we are in modern America, we are treated to the whole three-ring media circus that all this entails.  It then moves on in a rather spectacular serious of plot twists into a whole different territory, while still remaining within the basic structure of a missing wife story.   There are tons of reviews out there that cover the whys and wherefores of the plot.  Most of them seem to miss some critical points.  I will try and go over them without giving out too much in the way of teasers.
My take is that the entire novel is a satire on our society and its values.  Granted I tend to think of Missouri as being culturally a Southern State, but we will play along with the crowd and say it's Midwestern.  The main characters, both those from New York visiting the town, and the Midwesterners who are already there, are portrayed in an extreme way that displays how dysfunctional much of our activities as a nation are today.
The town has had an economic collapse because its mega mall, that drew people in from all over, has shut down.  Just down the river, Hannibal Missouri, hometown of Mark Twain, is slowly fading away as a tourist destination.  So it is not just a collapse, it is a second derivative collapse.  New Carthage didn't thrive buy making things, it never did anything particularly functional beyond retail sales, and now even that is gone.  Hannibal I am sure is fun, but the modern town (versus Twain's) built itself on tourism.  The commerce, the riverboats had been long gone.   When the Midwest and Northeast industries collapsed in the 1970s they called it the "Rustbelt".  What are they going to call this? The "Discounted Belt"?

Our young couple lives in an almost empty development where most of the homes were never owned, and the few that were have mostly been repossessed.  The populous has nothing better to do than follow around celebrities, or make faux celebrities out of (possibly) dead wives and their (for sure!) evil husbands.  O.J. iterate, O.J., O.J., O.J.
Throughout the novel there are constant references to people only knowing how to act because they have seen the scene on T.V.   The husband runs a bar that is rather obviously modeled along the idea of Cheers!  Other elements in the story portray our obsession with celebrity, the desire for control over even our rather flimsy desires, the grasping greed, and the desire for renown and adulation even in the most artificial realities.
It is a dark satire.  The author manages to poke fun at huge swaths of our society as the narrative moves along.  Her ever so slightly over the top narrative lulls the reader into thinking they are not included in the conversation:  she is talking about "those other" people.  I don't think so.   The ending is more than a little bit of a surprise, but it manages to mix in that perfect combination of the desire for the lumpy fuzzy feel good with the grasping controlling greed that makes our modern culture so wonderful to behold.  Some are confused by the ending.  I thought it was hilarious.
Obviously I liked the book.  I agree with the reviewers who put it in the year best category.  It is light years better than most contemporary fiction.  That it is the (hidden) story of a slow apocalypse, of course only warms my heart even more.
This is not exactly the type of novel that I designed my two descriptive categories for, but we might as well see where they take us.  Realism and Readability:  1 to 7: 4 is the mid-point, 7 is high.
Realism is rather easy.  It has elements of slightly over the top satire.  But it is very much set in our world.  It is a soft apocalypse, so of course money is the most relevant life issue.  But issues of identity and prestige are only slightly (if that) less central.  A slow collapse means that life sort of sucks, and a moment in the sun can go a long way toward sweeping away some of those cobwebs.  It is an uncomfortable 6.
Readability is very easy.  She is an extremely good craftswoman.  The author knows what tone she is trying to pitch, so you aren't going to get elliptical references to Greek or Roman  Gods, but there is the of hand comment (p208) about singing every word to the Tom Petty's American Girl.  A song that includes the lines

"Raised on promises / She couldn't help thinkin' / That there was a little more to life somewhere else" (p204),

and the very funny flashback to the gift giving on their first anniversary:

"neither of us liked our presents; we'd each have preferred the other's. It was a reverse O. Henry (p20).

So Ms. Flynn can drop the little symbolic clues, she just isn't going to make it too obvious.  She doesn't want to spoke the people who think its all about a missing/maybe murder mystery.  It is a compulsive enough read that I think we can even give it an honorary page turner status.  It is a literary 7.
Posted by russell1200 at 5:00 AM