The Jake Collins Band and The Fading Sun: A Review

Rob Krabbe's The Jake Collins Band and the Fading Silence (Kindle) is an apocalypse-in-progress set in the remnants of Chicago after a combination of magnetic pole reversal and solar flare crush modern society. 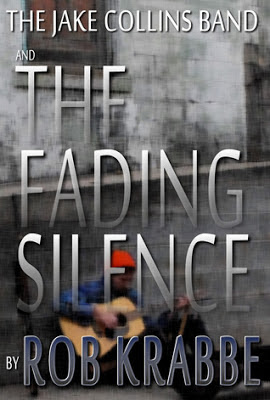 Rob Krabbe is a Christian musician (a sample) turned author.  This is his first novel.  His wife, Melissa, is a Presbyterian minister who recently finished up her nine month parish internship (see page 4 of pdf and some of her sermons) Married for thirty years there children are mostly grown.  Rob grew up in California, but in 2004 he and his wife moved to live deep in the woods in the foothills of Senecca, South Carolina.  They jointly publish a worship blog.  For all that, it should be noted that the novel has adult sexual content, along with gratuitous violence, and is not set around a mainline Christian view of the world.  The spiritual concepts portrayed strike me more along the lines of the fuzzy Buddhist concepts popular in some Christians and secular humanist circles.
The novel starts off with a rather long preliminary of a current world rock and roll show occurring somewhere around Chicago.  I was not aware that up and coming rock and roll shows still did outdoor stadium gigs, but in this world they do.  At the very end of the show, the lights go out and stay out.
The world is hit by a combination of a polar reversal, which collapses the earths protective magnetic barrier to cosmic rays and what not, and a large solar flair.  Depending on where you are exactly, you are either fried immediately, or if it is night and the bulk of the earth is between you and the sun, you fry as the sun comes around to your location.  Quick retreat to the basement is advised.
After the preliminaries, the story picks up 20 or so years latter.  It has calmed down some, but the continually flaring sun, combined with some pandemic waves over the preceding years have left the earths population at a fraction of its original total.  One advantage of the heavy decline though is that there has been a lot of salvage available to the survivors; but that salvage that is running out.
The cast of characters is extremely  PC.  You have a fabulous cross dresser, a beautiful deaf girl, a childlike genius supersoldier, a middle aged Cherokee superscout warrior woman, and the drummer and the singer from the previously mentioned rock and roll band.
Even the bad guys are PC.  They stand around in stark terror of the one bad influence super evil genius, and even the more active bad guys are able to rather easily repent of his ways and turn over a new leaf.  The evil of the Ubber Baddy is an explicit evil of the type found in James Bond villains - complete with deathray-like super technology, than a serious portrayal of the actual evils that people do in what they think of as the normal course of events.
The action and fight scenes are type-written versions of comic book actions.  You have guys (all the bad guy soldiers are guys) with 4 barrel automatic 10 gauge shotguns.  The good guys light a lot of C-4 with slow burn fuses (versus electrical ignition).  Thrown knives are instant kill weapons, and arrows are pretty much in the same category.  Obviously the guys at the O.K. Choral shot have been throwing knives at each other rather than using revolvers.
I didn't like this book in very much the same way I didn't like John Van Pelt's Summer of the Apocalypse .  Since there are a fair number of people that just love that novel, they may love this one as well.  This one has more grown up protagonists doing more grownup things, so maybe it will be liked by even more people.  It's just that I thought it was a ridiculous, emotional  mess. It reads very much like the wish fulfillment, PC feel good action adventure of someone who wanted to be a rock star.  The cultural references of the characters are further back in time (Example: Nancy Sinatra – These Boots are Made for Walking) than would be likely for today's young adults.  If the super villains were a little less evil for the fun of it, and a little more desperate evil, if the good guys were a little less cutesy perfect and brilliant you would had some elements toward a fairly meaningful story.

For our two descriptive ratings:  Realism and Readability: 1 to 7, 4 is the mid-point, and 7 is high.


Realism is actually somewhat difficult.  There are occasional stabs at realism.  The collapsed world has a realistic combination of cooperative folks trying to survive, along with some bad guys generally making life miserable.   But in the end it is all just to easy.  The author's good guy's talents are more on the level with superheros rather than normal humans.  That a middle aged woman, who in her previous life was a typical urbanite somehow transformers herself into a mystically powerful scout warrior woman who none can sneak up on (except when she is 'fooling around') and is able to beat supersoldiers who have a lifetime of training behind them is more about politically correct plot devices than reality.  Throw in some severely speculative sci-fi technology and you have a 2.
Readability is a little easier. Likely because the story is intended to drag on for another two books, the author spends a fair amount of time on banter.  Sometimes the banter is on point, sometimes not so much.  So it is not as fast paced of a book as an action adventure comic-like novel might be.  But the language is straightforward, and obvious typos are minimal.  It is a 4.