George R. Stewart's Earth Abides is a post apocalyptic novel set immediately after a fast acting contagion has swept the earth and killed 90+ % of the people.  It is set in the then contemporanies 1940s California.  The title comes from Ecclesiastes 1:4 — "Men go and come, but earth abides." 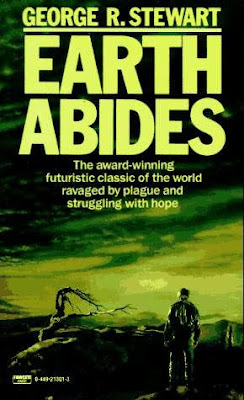 George R. Stewart was a very prolific writer, but Earth Abides was his only science fiction novel.  He did have other novels Ordeal By Hunger (1936), Storm (1941), Fire (1945) that portrayed natural or ecological disasters in a more contemporary setting.  James Sallis at the Boston Globe has done much to repopularize the work, and notes it best within the structure of his long career:

George R. Stewart's creative life ran forty-plus years, from a landmark biography of Bret Harte in 1931 to a major narrative of the Donner party, numerous volumes of the history of the American west, the novels Fire and Storm and five others — 28 books in all. Earth Abides was something of a sport. Yet it seems to me that, if remembered at all, Stewart will be remembered for this novel.

While told at the novelistic level, Earth Abides is also an exploration of natural cycles of population control, the size requirements needed to keep a modern society going, and racism.  Within the novel, without the the presence of the keystone species (man) we see a wave of animal booms-and-busts: first ants, then rats, then grasshoppers, and finaly cattle.  Populations explode, and then crash.
Some have also noted that the main characters nickname of Ish, is very similar to Ishi, the name given to the last survivor of the Yahi Indians, a man who came stumbling out of the mountains in 1911, and was written about Dr. Alfred Louis Kroeber (Ursula K. Le Guin's father) at Cal Berkley prior to Stewarts studies, and teaching there in the early 1920s. Given that he was a toponymist (someone who studies the origins of place names) the naming of his main character is not likely to be accidental.


Another intermittent theme throughout the novel is that “the trouble you are expecting never happens (mmpb. p14), and that “’’it has never happened’ cannot be construed to mean ‘it can never happen.’ As well to say ‘Because I have never broken my leg, my leg is unbreakable (mmpb. p.7).’”  This is not a high octane shoot-em-up.  But over time the new life does not develop in expected ways.  A combination of accidents, combined with the people available to the situation, have an oversized impact on the development of their small group of survivors.  Although they don’t interact with them much, other groups with different people and slightly different situations develop along different lines.
A lot of what we might think of as modern themes are also noted:
‘…we were just at the point of running out of copper or oil, or exhausting the soil so we wouldn’t have anything to live on in the future.”
So the skeptics who note that people have been voicing Malthusian-style concerns forever, to some degree correct.  If you want to take Hitler’s neo-agrarianism as a close cousin to those concerns, you can say that their influence has been very harmful.  But as the book notes “it has never happened” cannot be construed to mean…
Did I enjoy it?  Yes I did.  It is a rather sedately based book, but it does move along in its own way.  It reminds me a lot of the World Without Us but with the huge advantage of having a handful of observers around to make the whole exercise seem a lot less artificial.  It also allows for a little more leeway in the collapse scenario:  people saw it coming and did there best to get the machinery running somewhat on auto-pilot before they did.  It is one of the few collapse novels where there is an assumption that most people tried to the right thing before overcome by the pandemic.
For our descriptive (versus qualitative) descriptions of realism (which I sometimes refer to as grittiness) and readability.
I am not a big believer in pandemics that kill 99.9% of the people.  Certainly not one that can do it in a matter of few weeks, but I don’t generally deduct points for the plausibility of the collapse scenario, unless it has some sort of ongoing effect on the novel (like a zombie plague where the zombies would keep popping up).  The death toll is so extreme that unlike similar novels written a little bit later (Terry Nation’s Survivors for example) there is little materialistic pressure on people who take an active interest in their ongoing survival.  But the book takes pains to point out that many people are not prepared to survive even at this level, and that there is a large secondary die-off.  It also is very realistic in its assessment of small groups to organize themselves.  Ish is well-liked, and respected for his knowledge, but he is not a dynamic personality.  People listen to his advice, nod their heads in agreement, and then go right on doing whatever it was they want to do.  Other groups noted in passing do have leadership, and develop (possibly unwisely) along that leadership’s vision.  One of the main points of the book, is that the survivors are a random collection of people.  Important skills will be missing, and group development will tend to be very idiosyncratic.  All of which I would say is a realistic assessment.  On the less realistic side, the book often has narrator connective thoughts that come in from the 30,000 foot level.  These give a lot of information, but tend to greatly reduce the immediacy of the situation, and allow the readers more knowledge than the characters within the book.  On balance though, I still think the novel deals with the situation in a much more thorough, and rational manner than most.  I will place it one notch above the median at 5.
The book is fairly straightforward in its reading.  The slow pacing, and at times dated world view are modest deducts.  On the plus side, although the 30,000 foot descriptive authorial narratives may hurt the “realism” of the novel, they are a plus in understanding where the author is coming from.  Today authors are told to describe, rather than tell.  But the “telling” here is more interesting than most could manage.  It is a shame that this is the author’s only science fiction novel.  He would have added some wisdom to the genre.  I will put readability at a six: about as high as I am going to go with something that is not designed as a “page turner.”

Great review. Guess I've read the novel at least six times, the first when I was in high school many years ago. Thanks.

Stephen, thank you- although I can see a few typos that I did not catch.

Kelly, being a pager turner is not necessarily a compliment. Page turner is often very shallow in their scope, and very minimally descriptive. A page turner is almost always very immediate and here and now. This novel is far too reflective and thoughtful to be called a page turner. James Patterson is often noted as an archetype of the modern page turner author. He is not universally loved to put it mildly.

Actually, even being readable is not necessarily a compliment. Low readability can just be a book that is an absolute drag to read, or it can relate to a lot of oblique and/or symbolic language. Robert Edric’s Salvage - http://reflexionesfinales.blogspot.com/2011/10/salvage-review.html - is a book the had a relatively low readability score that I thought was none-the-less very worthwhile.

Now, if by page turner, you mean a novel that you loved so much that you tore your way through it that would certainly be a reasonable definition of a page-turner. It’s just not the one I am using.

For what it is worth, my favorite two of this contagious grouping, Breakdown, and Patron Saint of Plagues are at the end of this series of reviews.