What Came After: A Review

Sam Winston's What Came After is a dystopian post-apocalyptic novel set in the near future. I say near future because Henry Weller, the main character, can remember the "better times" and dystopian because extreme elements (progressions if you will) of our society today are still extant. It was a slow collapse for almost, but not entirely, everyone. 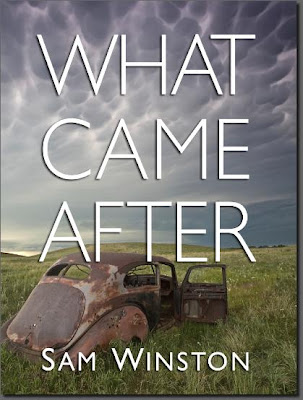 Sam Winston describes his attempts at becoming a published author as such:

It's been long and painful. I've written six or eight other novels, two of which were "good enough" to get me a New York agent without being "good enough" to get bought by a major publishing house. Along the way I got tired of the whole circus. And in the end, I figured that What Came After was so timely that I wouldn't even attempt going through that malarkey again. So I put it out there myself.

The collapse has happened.  Since we have been highlighting pandemics, the pandemic here is an engineered one.  The Big Ag Corporations have engineered plants that will poison, kill, maime, mutate, cause birth defects, etc.  if not processed before eaten.  In most areas, the animal population is also  decimated.  This leaves many areas of the United States close to uninhabited.  It is a botany based pandemic that seems to be the principal agent for getting rid of most of the people.
The book, as I noted at the top, is dystopian as much as it is collapsed. From its website blurb:

Set in the very near future, What Came After takes place in a too-credible third-world America that's been hijacked by corporations in the service of the wealthy. The Federal government has collapsed, health care is inaccessible, and private armies keep order. The upper class is concentrated in the cities, while the middle class—decimated by disease and poisoned by genetically engineered foods—labors on in a handful of desolate Empowerment Zones.

So you see, it is an evil plot by the evil (weighted toward Republicans) politicians, and monolithic Corporations. It reminds me a little of part of one of John Michael Greer’s recent comments about video Thrive:

The basic message of Thrive is that we all ought to be living in a wonderful Utopian world, and would be doing so if evil corporate conspiracies weren’t suppressing the inventions that would have given us limitless free energy, cures for cancer and, well, pretty much anything else your heart desires. Evidence? We don’t need no steenking evidence—and of course, in an entirely pragmatic sense, Thrive doesn’t; all it has to do is hammer over and over again on a set of emotional hot buttons until the viewer’s ability to reason is overwhelmed, and if the video fails at this, it’s certainly not for want of trying.
The novels first assumed tenant is that the our perceived normal is that of today’s world or super-abundance, and that it is only because of mean people (like the mentioned Dick Cheney) that the world isn't a nicer place.

Dick Cheney is not at the top of the list of people I would like to see get run over by a bus, but let us grant that this notion is correct: "Dick Cheney + Fast Moving Bus = Better World". I would beg the question: Has there ever been a world with humans, possibly even proto-humans, where the local Dick Cheney meeting the fast bus would not have made people happier? It seems to be a pretty much constant equation.
So to my mind, if mean-people are the constant, then you need some sort of other variable that makes your situation worse than normal. I suppose that the author would argue that the variable is the broken system that we currently live in that allows these bad people free reign. I would grant that would seem like a plausible argument, but then you get into arguments about who are the bad guys. And while I will grant you that today’s Democrats and Republicans occasionally look like they are trying to bring back some sort of fascist-lite state, it still begs the question of why they feel this need. If you want to look at the original Fascists, you would point toward economic collapse of the early 1930s, combined with other factors such as a new industrialization, new mass media, and nationalist tribalism.
The point being, that it is all very fine and good to say we need to get rid of the Fascists, but unless the underlying cause – the place and the time – change, you are not likely to change very much.  You are simply going to get a similar soup with a few different vegetables thrown in.
The name of the main character, Sam Weller, presumably comes from Dickens’ character of the Pickwick Papers.  I have not read the Pickwick Papers, so I can only take it on advice that he is one of those classical humble everyman that is preternaturally brighter than those of a more lofty status.  The character gave rise to the term  "wellerism" which is a satirical proverb or aphorism.
The basic plotting of the book, is that this everyman, wants to cure his very cute 5-year old daughter of her progressive blindness.  The plot is his various adventures, and observations as he travels down the East Coast of the United States in pursuit of the needed items to pay for the required medical treatment.  He eventually makes his way through the Carolinas on his way toward Spartanburg, South Carolina.  Except for Florida, the Southeast United States is generally given short-shrift in these novels (often wiped out by Huricanes) so it is nice to see someone wandering around the ruins of Greensboro, NC.
What was my personal take on the book? It was O.K; starting out slowly with a lot of obvious and dated polemics. I don’t think future people are going to refer to torture as Cheneying (as in Dick Cheney) someone. Arguably this is an attempt at satire, but the book is a little too self-serious to work well as satire. It finished up with a little more activity. The action and end-result are not particularly realistic, but they are mildly entertaining. The pacing is very uneven: uneven with a distinct trend toward slow.  On a plus side Weller and his family are a likeable bunch.  Weller, has almost no combat skills, but his value as a mechanic makes him very a very useful in a world where lots is laying around, but not much of it is working.  A nice change from the ex-Navy SEALs we often see in the genre.
For the non-qualitative descriptive ratings (1 to 7 with 7 being high):
Realism (grittiness) is tough to figure. It is not that what is stipulated is per se impossible, it is just that everything is polemic to the point of caricature. A book that can me either mistaken or intended as satire is usually not going to seem very “real.” The storyline, unlike most of real life, is rather mono-line, and episodic. One Amazon reviewer said that it was the Wizard of Oz meeting Conrad's Heart of Darkness.  If you could pull that off, that would be an amazing book, but not a particluarly realistic one.  I am going to say that it slightly below average at 3.

Readability suffers  because of the uneven pacing. It is certainly not a page turner, but it is not overly complicated either. I am going to say it is in the middle at 4.
Posted by russell1200 at 5:00 AM