K. H. Koehler's Raiju (Goodreads, Amazon UK) is a different sort of apocalyptic (as in revelatory) novel, and is explained by its full title:  Raiju: a Kaiju Hunter Novel.  Kaiju are the oversized Japanese monsters, best represented by the infamous Godzilla, that first came out as a response to the threat of nuclear.   The threat today is more supernatural in nature, and the storyline is taking place in the United States. 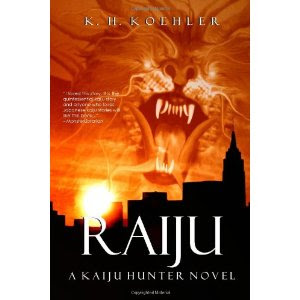 K. H. Koehler (as self described)  is a freelance editor, a cover designer, an associate editor at KHP Publishers, and owner of K. H. Koehler Books. She has written numerous published short stories, and is a prolific novelist. She lives in the beautiful wilds of Northeast Pennsylvania with two very large and opinionated Rottweilers.

The storyline is a Hollywood version of  angst.  The cool teens are far too talented, the geeky teens are far to bright, and the teenage hero eventually becomes something of a mystic warrior without even requiring minimal levels of training.  It is billed as a teen novel, but has a significant amount of gratuitous (not required by the plot) swearing.

Kevin is a Japanese American teen whose original home, San Francisco was devastated by a giant shark-like monster.  His Irish mother, along with his best friend and many classmates died in the disaster.  His father decides to go to safety on the other side of the continent: New York City.  But the monster mayhem follows them.

Fortunately, Kevin, as is alluded to very early on, has special talents/powers that allow him to fend off these creatures before all of Brooklyn (versus numerous city blocks) can be destroyed.

The original Godzilla was, at least in part, made what he was by nuclear testing.  As with the big "G", so also here,  the gigantic monsters make a pretty good stand in for a small to mid-sized nuclear strike.  There is no radiation, but plenty of fire, and there is enough thought behind it to show relevant people dying, and extra hospital beds being pressed into service to deal with the situation.

By the end, I found that I had enjoyed the story.  It feels a bit rushed at times; a little bit of a written word comic book.   I found the pointless foul language to be an odd choice for a YA novel, but otherwise it would be a reasonable choice for politically correct parents of older teens.
We have our two descriptive ratings: Realism and Readability; 1 to 7; 4 is the mid-point; 7 is high.
The novel is more realistic than you would think of a monster movie mashup of sorts.  The causal agents of destruction (giant monsters) are not "real" but the effects of the damage and devastation are.  People die, and people are traumatised, and everything doesn't become magically better.  The kids seem to have a little bit too much time and money on their hands, but not all of their plans work.  So for a fantastically natured book, I will give it a relatively high 3.
Readability is not a measure of literary merit, but literally, how quick and easy of a read is it.  As a verbal comic book, it at times reads as a page turner.  A little too much time is spent on school age angst to be a true cyclone-speed adventure, so we will call it a non-literary 6.