In The Country of Last Things: A Review

Paul Auster's In The Country of Last Things (Amazon, Amazon U.K.) is the story of a slow economic collapse set in an unnamed (possibly New York) city.  The collapse is severe, but somewhat localized. 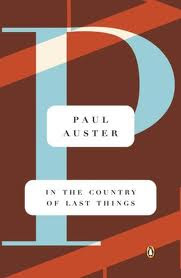 Paul Auster (1947) is a very famous author.  His better known works include The New York Trilogy (1987), Moon Palace (1989), The Music of Chance (1990), The Book of Illusions (2002), and The Brooklyn Follies (2005). Both of his wives have been well known authoresses in their own right.  He has won numerous awards.  To my knowledge this is his only apocalyptic/dystopian story.

Our story here is told through the letter of Anna,  a young lady of 19,  to an unnamed friend.  She has left for an unnamed city to find her brother who went there as a reporter and never came back.  The same fate awaits her, and quickly after her arrival, she losses the means to escape the beleaguered city.

Just because you are able to get in, that does not mean you will be able to get out. Entrances do not become exits, and there is nothing to guarantee that the door you walked through a moment ago will still be there when you turn around to look for it again.

At the point that she has arrived, the city is already in collapse. Many people are homeless.  If you find a place to stay, you are always at risk of gangs breaking in and throwing you out, after taking all your valuables first.  There is very little in the way of policing.  While there is a licensing scheme that is enforced on garbage pickers, they need to watch their cart closely or they will have it stolen.  The only acceptable way out is through various methods of legalized suicide.

The story as a whole is of a society that is living off its remnants, but which is slowly running out of things to pawn off.  Nothing productive is done, and what organization is left, does not seem to be to much purpose other than holding some distant, mostly unseen, elites in a slightly better position than the rest of the folks.

The novel was published in 1987, which is around the time period that I lived in New York City for a few years.  The Bernhard Goetz subway shooting trial had recently finished, and  1987 is the year of the Tawana Brawley fiasco that brought Al Sharpton to prominence. The place, at least news-wise, was a zoo.  Given his focus on New York City in his earlier writing, I think this story, which apparently had an earlier genesis, was a natural outgrowth of the problems that were occurring in the city at the time.  One frequently quoted passage seems to sum up his thinking:

Our lives are no more than the sum of manifold contingencies, and no matter how diverse they might be in their details, they all share an essential randomness in their design: this then that, and because of that, this.

There is some question as to who is the person that is reading Anna's letter.  On at least a technical level, this has been noted in a latter novel by the author.
Paul Auster, The Art of Fiction No. 178
Interviewed by Michael Wood, Paris Review, Fall 2003, No. 167

David Zimmer is the central character [of Book of Illusions] and when the novel begins, his wife and two boys have just been killed in a plane crash. It turns out that we already know David Zimmer from one of your earlier works. He’s Marco Fogg’s friend in Moon Palace. We also learn in that book that he was the person who received Anna Blume’s letter, which, in effect, formed the entire contents of other of your early novels, In the Country of Last Things…

I’ve known Zimmer for a long time. But he’s older now, and a lot has taken place since we last saw him.

The fictional David Zimmer is, or at least becomes, a professor in Vermont.  I am not sure what exactly that tells us about our story here, other than making the commonly presumed  location of New York City even more likely.
I did like the novel.  It was  a little hard to figure out exactly where the author was going with it at times.  I have not delved into them, but there are some rather sudden plot twists.  The novel is both very stark and brutal, and yet rather dreamlike at times as well.  As an homage, of sorts, to the New York of the day, the introductory quote from Nathaniel Hawthorne suits it well

Not a great while ago, passing through the gate of dreams, I visited that region of the earth in which lies the famous City of Destruction.

We will move along to our descriptive ratings: Readability and Realism: 1 to 7; 4 is at the mid-point, 7 is high.
Realism:  There are some clearly fanciful elements, such as the way that people begin to forget about once common place technologies.  But the novel is still probably more realistic in its assessment of the everyday realities of an urban collapse than some that are actually trying for a literal interpretation:  a 5.
Readability: Auster, I gather is at times a bit puzzling to fathom, with this novel being much more straightforward than many of his other works. There are some allusions, and some symbolism, but a lot of it is relatively straightforward, or at least partially explained latter. There is the ambiguity of not really knowing all of the narrator's background, and some key portions we do know, not until well into the story.  But as a whole, it is not too hard to figure out what is going on, and being 188 pages, the novel is barely out of novella territory:  a literary 5.
Posted by russell1200 at 7:00 AM

MY guess is it would be hard for a city to get deliveries if the door would close behind them.

Interesting. I might have to find me a copy...

Pioneer: See, just a few minutes of introspection and you have solved their problems! LOL - the book is an odd mix of reality and non-reality at times.

K: There are not that many well done urban collapse novels out there.