Toiling for dollars that is.
Note that the tunnel is only on the other side of a wall from the U.S. border.  I think a lot of people forget who tight some of the countries urban area abut one another when they talk about sealing off the border.
Drug Smugglers Tunnel Into Arizona Parking Spaces
Randy Kreider, ABC News, 13 October 2011 c/o Borderland Beat
Drug smugglers are endlessly creative when it comes to inventing ways to move marijuana, cocaine and other contraband from Mexico into the United States.
In the latest innovation uncovered by law enforcement, smugglers in the border town of Nogales, Arizona were bringing drugs into the U.S. for the cost of a quarter.

The parking meters on International Street, which hugs the border fence in Nogales, cost 25 cents. Smugglers in Mexico tunneled under the fence and under the metered parking spaces, and then carefully cut neat rectangles out of the pavement. Their confederates on the U.S. side would park false-bottomed vehicles in the spaces above the holes, feed the meters, and then wait while the underground smugglers stuffed their cars full of drugs from below.
Tunnel Picture 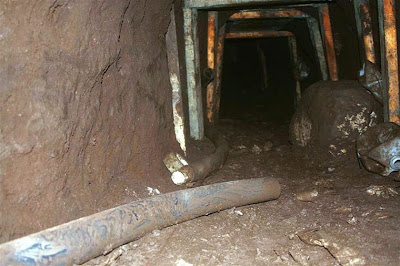