Egypt and the Malthusian Trap

Normally it takes a little while for broad historical analysis to catch up with events.  Thus I was pleasantly surprised to see Andrey V. Korotayev and Julia V. Sinkina’s Egyptian Revolution: A Demographic Structural Analysis.   I am quoting it at length, but there is much more discussed than I am quoting.  All quotes, except for the last are from this excellent paper.

What caused Egypt to collapse?  A number of theories have been stated, but many of them are no truer for Egypt, than they are for many other countries in the world.

One item of frequent speculation is the effect of food prices on the impoverished population.  The poor spend a disproportionate amount of their resources on food. When food prices go up they are particularly hard hit.
A global economic post crisis recovery led to the blowing of new price bubbles in the world food market almost reaching or even exceeding the peak levels of 2008. Basing on the model by Gamal Siam and Hanady Mostafa Abdel Radi, we have to expect that the proportion of Egyptians living below the $2 a day income poverty line should have reached the 2008 level by the start of the Egyptian Revolution (see Figs 17–20): 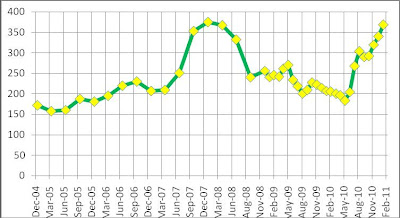 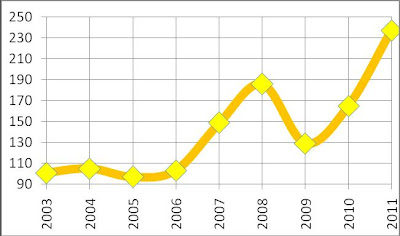 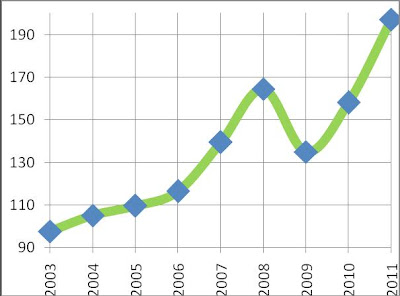 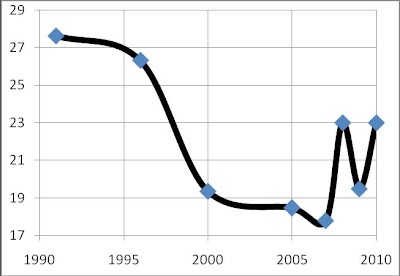 Fig. 20. Proportion of population living below $2 a day income poverty line, Egypt, %, 1991-2010
Did this food price dynamics and the dynamics of Egyptian poverty headcount related to it have influence on destabilization of Egyptian sociopolitical system? Definitely, it did. Indeed, though both in spring 2008 and in January 2011 Egypt remained one of the most well-to-do Third World countries in terms of poverty, fast growth of the world food prices (taken that Egypt highly depends on food imports) led to a fast growth in the number of Egyptians living below the internationally recognized poverty line. In both cases more than three millions of Egyptians fell below the poverty line during a short period (several months).

In spring 2008 the protests against food price growth surged in Egypt. The central event was the strike of spinning and weaving factory workers in the industrial city of al-Mahalla al-Kubra which started on the 6th of April, 2008. The worker’s dissent was aimed first and foremost at the decrease of living standards caused by food price growth. Egyptian bloggers supporting the strikers launched a Facebook group called «April 6 Youth Movement». It is known that this movement played a crucial role in the Egyptian Revolution 2011. Still more important was social self-organization through Facebook which was first successfully tried in spring 2008 by this youth movement and proved its efficiency in 2011 events
It continues on to note the many government actions, partly successful, partly very unsuccessful, that were taken to ameliorate the food price increases.  It goes on to note, that in general, Egyptians were not starving.
It then starts to discuss not only the past population growth of Egypt, but also the nature and shape of that growth.  It then goes on to show how certain types of growth lead to particular problems in the resource trap known as the Malthusian cycle.
Let us first answer a really simple question: What impact could the escape from the Malthusian trap have on life expectancy and mortality? Naturally, when undernourished people solve the problem of starvation and start eating enough, their life expectancy increases and the death rate of the population decreases. This was observed in all the known cases of the escape from the Malthusian trap, and Egypt was no exception (see Figs 23 and 24): 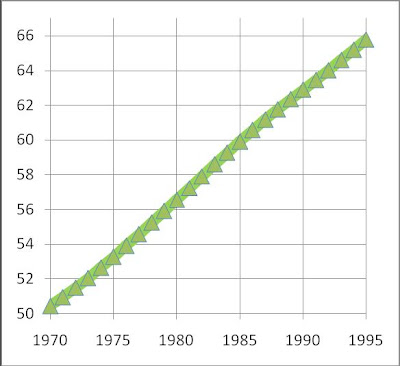 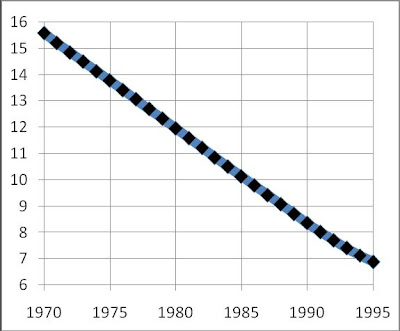 Fig. 24. Crude death rate per 1000 population, Egypt, 1970–199553
Thus, Egyptian escape from the Malthusian trap was accompanied by impetuous life expectancy growth, while death rate decreased nearly twice (!) in just 20 years (1970–1990). In full accordance with the theory of demographic transition54 decrease of birth rates followed with a usual remarkable lag.
Mubarak’s administration was well aware of the threat hidden in the growing gap between declining death rate and stably high birth rate, and almost since the beginning of Mubarak’s reign (1981) it started taking measures aimed at bringing down the birth rate. However, only in the second half of the 1980s the government managed to develop a really efficient program of such measures. This program was performed by the Egyptian government in collaboration with USAID program aimed at wide-scale introduction and distribution of family planning. Religious leaders (from al-Azhar sheikhs to local imams) were involved in the program to disseminate (in their fatwahs and sermons) the idea that family planning was not adverse to alQur’an; on the contrary, it is good, as having less children makes it easier for the parents to give them a happy childhood and good education. This strategy proved essentially effective, as during 5 years (1988–1992) total fertility rate in Egypt fell from 5 to 4 children per woman.
However, until the second half of the 1980s the gap between birth and death rates was increasing. As a result, population growth in Egypt in the 1970 and 1980s acquired explosion-like shape (Fig. 26) and started to decline significantly only in the late 1980s. 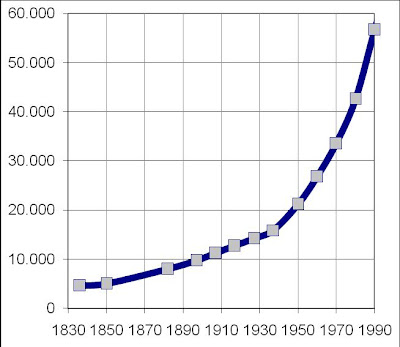 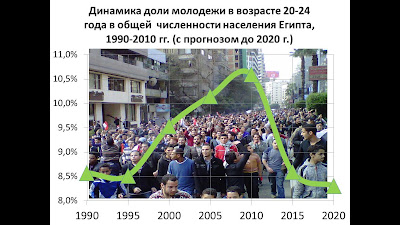 Jack Goldstone notes that «the rapid growth of youth can undermine existing political coalitions, creating instability. Large youth cohorts are often drawn to new ideas and heterodox religions, challenging older forms of authority. In addition, because most young people have fewer responsibilities for families and careers, they are relatively easily mobilized for social or political conflicts. Youth have played a prominent role in political violence throughout recorded history, and the existence of a “youth bulge” (an unusually high proportion of youths 15 to 24 relative to the total adult population) has historically been associated with times of political crisis. Most major revolutions … [including] most twentieth-century revolutions in developing countries—have occurred where exceptionally large youth bulges were present….
As we have seen above, at the beginning of the 2011 Egyptian Revolution the unemployment level in Egypt was about 9% which was not very high according to global standards. However, the most important circumstance (caused just by the “youth bulge”) is that about half of all the Egyptian unemployed belonged to the 20–24 age cohort! Total number of the unemployed on the eve of the Egyptian Revolution was about 2.5 millions.66 Accordingly, on the eve of the Revolution Egypt had about one million of unemployed young people aged 20–24 who made up the main striking force of the Revolution.
The authors point out, that based on our numbered points above, the Mubarak Regime had every right to presume that it would continue to maintain its power.  But in a tinderbox of social unrest in neighboring countries, the under employed youth bulge was an ever present danger.
…many young Egyptians vehemently demanding Mubarak’s resignation (or even death) would have been destined to die in early childhood and simply would not have survived to come out to the Tahrir Square.
What is not commented on is that if a country survives its youth bulge, it winds up with a middle age bulge, and then an aged bulge.  Both cause problems of their own.  Japan is in its aged bulbe, we are starting ours, and China, because of its one-child policy has entered its middle-age bulge.
Smaller versions of these age cycles have been relatively common.  It is just that the timing differences are much more finely tuned. As noted in Glen Eldar, John Modell, and Ross Parke’s Children in Time and Place.  When discussing a set of children born around 1920 versus another group around 1928.
On the basis of the life-stage principle, we would expect the meaning of hardship in the Great Depression to differ significantly for the two sets of children.  The older children, at 9 to 16 years old during the height of the depression, were too young to leave school and face a dismal employment situation but too old to be highly dependent on the family.  By comparison, the younger children, 1 to 8 years old, were at the ages when they would be most dependent on their families in the midst of the economic crisis and thus were at greatest risk of impaired development and life opportunities (p14).
Note that as the economic cycles fluctuate, so does U.S. birth totals.  To some degree that is how we wound up with the baby boom.  Well, when the bulges get really big, and the third world youth bulge is really big, it can be extremely destabilizing.

The youth protesting in Tahrir, in part were able to do so because Egypt was wealthy enough for them to survive.  When we faced similar problems with our U.S. baby boom, and started running into resource constraints (1974), we eventually went on a thirty year + borrowing binge.  We were starting with more land, more food, and a much greater basis of wealth.  But it is not yet sure that our government will survive better than the Egyptians.