Doris Lessing and The Memoirs of a Survivor

I enjoyed the following passage from Dorris Lessing's  Memoirs of a Survivor : 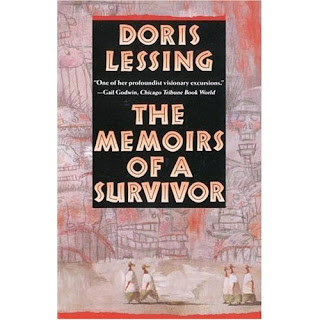 All over the city were these groups of people, moving from one place to another , pub to tea house to bar to outside the shops that still sold televisions.  These groups were like an additional organ burgeoning on the official organs of news; all the time, new groups or couples or individuals added themselves to a scene, stood listening, mingling, offering what they themselves had heard-news having become a sort of currency-giving, in exchange for rumour and gossip, gossip, and rumour. … Of course it was often inaccurate. But then all news is inaccurate. What people were trying to do, in their continual moving about and around, nosing out news, taking in information, was to isolate residues of truth in rumour, for there was nearly always that….

One item addressed well in her book is that there is a very general confusion as to what exactly is happening and what the correct action is.  In fact it is fair to say that she does not believe there is much in the way of correct actions.  There is some odd surrealistic 1970s hallucinatory-psychological moments within the text that left me a bit puzzled.  If I had been a bit more patient, I am sure they would have made more sense:  but I wanted to find out what happened.

I found the following interesting interview of Ms. Lessing by Bill Moyers transcript of interview

BILL MOYERS: Well, you remind me of something you said in volume one of your autobiography. Quote, nothing in history suggest that we may expect anything but wars, tyrants, sickness, bad times, calamities. While good times are always temporary. Why are we so bitterly surprised, you write, when our country, the world, lurches into yet another muddle or catastrophe. Why is it that so many people in our time, you write, have felt all the emotions of betrayed children?

DORIS LESSING: Well, now that fascinates me. Where did it come from? Particularly the-- 1960s kids onwards. Everyone seemed to think that they were promised paradise? Well, who promised it to them? And you meet people-- I meet people, who are genuinely aggrieved that things are not perfect. That they haven't had-- paradise.

Doris Lessing's Mara & Dann is one of the better post-apocalyptic books I've read. Top 10, probably. I've never read this one, though, but would like to.

I have not read Mara & Dann. Since you can buy it for a penny plus shipping, I will get a copy. "Memoirs" is an apocalypse-in-progress (AIP). Thus the tether that holds its plot and setting to our world today are much tighter.

I don't ignore post apocalyptic (PA) writing entirely, it is just that it can have such a loose attachment to our current world that it is hard to do much in the way of cross comparisons. It makes it particularly tough to write a blog post length review.

While it can be true of an AIP writings, the PA novels tend very strongly toward the artificial thought experiment. I tend to find that type of work a bit preachy. AIPs are often very preachy, but the practicalities of the situation often make them less central to core themes of the book.

This posting was not entirely intended as a review. I was still trying to figure out the best way to do my reviews, particularly given the diversity of audience I get.

The book is highly psychological, and there is a suspicion that the lady is starting to suffer dementia.

The book also has that odd theme found in much British apocalypse fiction of any type - the absolute terror of their younger generation.