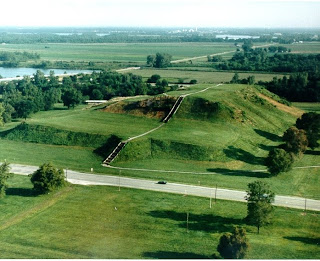 The Mississippian Mound Culture is one that I would like to learn more about.  It is one of the many disappeared cultural groups that can be found throughout  pre-history.  They suffer from a lack of respect and a lot of pseudo factual speculation.

In looking around the web, I see a lot of discussion of them as a "Chieftain Culture".  But when you look at the geographic spread of the culture this seems hard to justify.

Having a corn based culture, and this same corn would have come recently from Central America, it seems rather obvious that there was a least some derivative connection with the Temple Builders of that area.  But since they used the building materials most available to the area, there is enough dissimilarity to question the extent (and possibly even the fact of) the influence.  I have seen some glancing mention of human sacrifices associated with the remains.

Another common assumption is that the Mississippi culture is the forerunner to many of the latter groups that the Europeans were more familiar with.  However, it is not clear why a collapsing agricultural society is a good candidate for forerunner of anything.  When the Hittites collapsed in back in the biblical times, they remained completely unknown until their architectural remains were found.  There is one remote successor group mentioned in the bible, and that is about it.

Maintaining a complex cultural identity takes a lot of time and energy.   When "things get simple" most of that appears to go out the window.
Posted by russell1200 at 5:51 AM