Emily St. John Mandel's Station Eleven is a pre-apocalyptic and post-apocalyptic novel set 20 years after the "Georgia Flu" pandemic, and the resulting chaos thereafter, have killed ~99% of the worlds population.  The action takes place along the re-wilded western shores of Michigan south of Traverse City.  I note it as being pre-apocalyptic because about the half the novel involves look backs at relevant characters and their activities in the lead up to the deadly event. 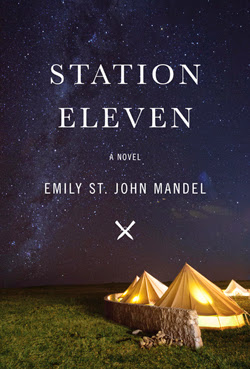 Emily St. John Mandel (St. John is her middle name) is a main stream literary novelist whose interest in post-apocalyptic fiction has lead her to stray into new territory.  She was born on the West Coast of British Columbia, Canada. She studied dance at the Toronto School of Contemporary Dance, and now lives in New York City with her husband where she is a staff writer for The Millions: a weblog about books and the publishing industry.
This novel combines interesting elements of main stream fiction and the post apocalyptic genre to where it has received an enormous amount of attention within the main stream reviewing media.  It has received glowing reviews all over the place and is at the moment a 2014 Book Award Finalist. Although not inclined to agree with their world view, being very much the Canadian version of the NPR gun control, socialized medicine crowd (interview), her research included a number of survivalist forums, to give the apocalypse a realistic feel.  One wonders if it is this research that prompted her to take up terrace gardening?
She notes in another interview:

My assumption is that in the immediate aftermath of a complete societal collapse, it probably would all be rape and mayhem. But probably not forever, because constant mayhem isn’t a particularly sustainable way of life and because I harbor a possibly naïve but stubborn notion that the overwhelming majority of people on earth really just want to live peacefully and raise their kids and go about their business with a minimum of fear and insecurity. So I think that the initial spasms of violence would most likely eventually subside, and people would start figuring out ways to live together again, with systems of local government and division of labor and such. I think that twenty years after the collapse, there’s a fair chance that at least some parts of the world would be fairly tranquil.

Maybe so, but there is still a lot of danger in this quieting post-apocalyptic world.  She noted that her original idea had been to have a simple story of a wandering minstrel type traveling through Michigan. Granting the novel's theme of "survival is not enough", her realization of societies fragility, and the basics of survival have made the story a bit darker.
The story begins, in the here-and-now,  with the death of famous actor Arthur Leander who is playing King Lear on stage in Toronto.  He misses, barely, the coming pandemic that has already reached the city.  Although Arthur can be said to have died an "actor's death" we learn that contrary to all his success, he was a restless unsatisfied sole doing the Hollywood thing of going through multiple wives, and detached from his only child.  The story goes through moments of his life, and through the moments of a variety of folks within his orbit (wives, child actresses, paparazzi, et al) leading up to the pandemic.
The title of the novel comes from a graphic novel that his first wife, Miranda, has been working on throughout here life, but never quite finishes.  She had ten copies of the first two issues printed, and in a roundabout fashion they come into the hands of Kirsten, the seven-year old child actress in the King Lear production who becomes the main protagonist, at age twenty-seven, of the post-apocalyptic portion of the tale.  As remembrances of her vaguely remembered life before the collapse, they are her treasured possessions.

The storyline of Station Eleven is that Dr. Eleven a hostile civilization form a nearby galaxy has taken control of Earth and enslaved Earth's population, but a few hundred rebels managed to seal a space station and escape by slipping it through a wormhole and hiding in deep space.  The Stations is the size of Earth's moon, but requires no sun and is mobile.  Unfortunately the artificial sun it uses has been damaged cloaking the interior in permanent twilight, and the water control systems got out of control and flooded all the dry land except for a few isolated islands.
On the station there is a rebellion, the Scientist wants to keep out of the grasp of the Earth enslavers.  The majority of the population, which has taken to living underwater in the submerged portions of the station, want to go back to Earth and plead for mercy.

They live out their lives under flickering lights, aware at all times of the fathoms of ocean above them, resentful of Dr. Eleven and his colleagues who keep Station Eleven moving forever through deep space. They are always waiting, the people of the Undersea. The spend all their lives waiting for their lives to begin.

There are other details of the story, but that is the main summary.  People waiting for their lives to begin.

The Traveling Symphony is both a small symphony and an acting troupe. at the time of the story A Midsummer Night's Dream: although they also do Hamlet and King Lear. The motto of this small troupe, who try to bring entertainment to an archipelago of small towns, is the Star Trek inspired "Because survival is insufficient."  They are housed in horse drawn repurposed pickup trucks. As I noted above, although in year Plague +20, the danger level is much lower, the group still keeps on the alert for trouble.
The troupe going to a remote location, St. Deborah by the Sea (possibly inspired by Frankfort, MI) the very edge of their traveling territory, to pick up a couple they had dropped off they dropped off two years ago to take care of their newborn.  They come to find the village's character has changed in the intervening years.  A rather creepy "Prophet" is now in charge.
The various pre-apocalyptic, and post-apocalyptic plot lines are intermeshed.  Not all of the plotlines involve the traveling troupe, but all are in some fashion related to Arthur Leander. WE do get glimpses at the back story of various folks, so the apocalyptic story is not ignored.  It is not worthy that while the main excitement is found in the post-apocalyptic world (interactions with the prophet mostly), the look backs to the modern world about to collapse are interesting enough keep ones attention.
There are a number of themes running through here. King Lear, as one reviewer noted, is noteworthy for articulating “unaccommodated man” — humanity stripped of luxury and easefulness.

Is this all a human being is? Look at him. (to EDGAR) You are not indebted to animals for your clothes since don’t wear silk, leather, or wool—not even perfume. Ha! The three of us are sophisticated compared to you. You’re the real thing.

The human being unburdened by the trappings of civilization is no more than a poor, naked, two-legged animal like you (modernized, King Lear Act 3, Scene 4).

In an interview, the authoress has noted:

King Lear struck me as an ideal play for that moment, because on one level it’s a play about loss. Lear loses absolutely everything—his kingdom, his family, his dignity, his life. Everyone in the theatre stands on the precipice of losing everything.

Although I think it is fair to say that the post-apocalyptic dominates the plot line, it is the difficulties, or we could almost say "the perceived difficulties" of folks who are living in the here-and-now, that give the post-apocalyptic reality its poignancy.  Within both timelines there is a search for meaning, and for what is really important.  It is not just about survival, as the troupes motto notes, but is also not about the going through the motions in the way that much of the modern world induces us to behave.  Throw in a number of thoughts about art, life and ambition (possibly influenced from the also non-linear A Visit from the Goon Squad that she lists as a favorite), and you get the complete package.
Did I like it?  Yes, I had a lot of distractions, but I still managed to work my way through it pretty quickly.  The author's use of language is excellent, and all her settings do a wonderful job of putting you in the scene: a difficult accomplishment given the number of characters, and the variety of settings.  Her post-apocalyptic world has a very plausible feel to it.
We now come to our two descriptive (not qualitative) ratings: 1 to 7 with 4 the mid-point and 7 high. Realism does not include the cause of the collapse or apocalypse, but is otherwise an assessment of how close to today's world is the setting. Could you imagine your friends, or families living through the situation. Readability is not literary merits, but literally how quick and painless of a read.
Realism is rather easy.  It is the story of the very near future modern world that collapses due to a very (may a little overly) contagious influenza-based pandemic.  Those who don't die of the disease, often don't survive the near term rape and mayhem. Issues of the slow loss of top notch salvaged, the value of modern schooling in a post-modern world, and the difficulty of restarting society onto a modern track are all reasonably well explored.  There is also enough of a storyline in the here-and-now, and within the near term apocalypse, that you don't get that detachment from the setting that can occur with a lot of futuristic science fiction.  It is a seven.
Readability is a little tricky in that it is a pretty straight forward story, but it is not told in an entirely linear fashion.  However, I don't think at any point we are confused by who someone is when they are introduced.  As far as I can recall, all of the characters are introduced in the here-and-now timeline, before we meet their part of the post-apocalyptic storyline.  The Prophet is a partial exception, but the mystery of the Prophets origins is a major subtheme of the book, so it is used as a tension builder, not a confuser.   There are a few portions, mostly around  (the likely somewhat autobiographical) college years that go a little slow, so it is not a page turner.  So with two deducts (non-linear, not all zippy action) we'll call it an above the mid-point literary 5.