I am a little late getting to this, but college graduate earnings dropped again in 2011.  The early reports from 2012 were hopeful, but still preliminary: we should know by now that this stuff gets corrected a lot. 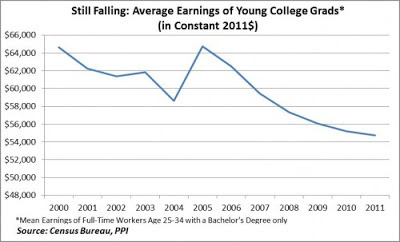 Note that this is part of the deflationary spiral that should be embarrassing the Austrian-style economists.  Or it would, if the other economists had a better clue.
Real wages are a very strong indication that an economy is turning around.  Wages are a  concurrent indicator, employment is a lagging one.  Companies will add overtime before they will add workers.  Note the sharp up tic (2003 to late 2005) matches very closely the housing boom's best years with August of 2005 being the peak of housing construction.  In a short cyle, peak employment is often just before a downturn.
Posted by russell1200 at 7:00 AM

It is not an embarassment at all to Austrian economists; the key word is "real", as in the effect of inflation taken out.

John: The Austrians predict the initial crash back to value, but don't do a whole lot with what happens next outside of their set number of scenarios.

In an economy that has deflation in many assets, but inflation in many commodities, the idea of nominal versus real dollar gets a bit moot in any case.

In an economy that has artificial controlled deflation brought on by Fed Reserve manipulation in many assets, but inflation in commodities they cannot really control, the idea of nominal versus real dollar gets a bit moot in any case.

There I fixiddit for ya :)

Pioneer: LOL -thanks. I actually don't think they control all that much except at the margins, or in the wrong direction (they can inflation or deflation worse).