The Patron Saint of Plagues: A Review

Barth Anderson’s The Patron Saint of Plagues is a somewhat near future science fictional tale of pandemic apocalypse-in-progress.  It differs from you typical Center for Desease Control (CDC)rescue in progress in that it is taking place within the context of a world that has already suffered through severe trauma and economic dislocation. 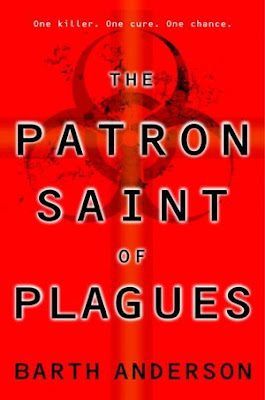 Bath Anderson is an award winning short story writer, and has two novels to his name.  In his day job, he has spent 20 years in the natural food industry.  He blogs at the Huffington Post, has a dead-live journal, and a moribund blog.   Although he lives in Minnesota, both his novels have either South or Central American background.  He notes Kurt Vonnegut’s Cat's Cradle as a major influence.  To the extent that Cat's Cradle is said to explore themes of science, technology, religion, and death the book's influence can be seen here.  However, Unlike Cat's Cradle, The Patron Saint of Plagues is not a particularly fanciful novel.

The novel has more the feel of the contemporary drama The Hot Zone, than the futuristic Windup Girl.  Set just over 50 years into the future, most of the action is primarily centering around the mega city of Ascension.  The new name, for the newly built and powerful Mexico City.  It works hard to be obscure about its timeline, but based on a reference to the reign of Emperor Maximilian's Hapsburg Castle on Chapultic Hill, the book would be taking place somewhere around 2064-2067.  Normally this "distance" into the future would give the book a certain surreal quality.  But the downsizing of the United States through an oil and agricultural collapse, and the very deep setting within  (to citizens of the United States) foreign culture that is Catholic Mexico avoids that sense of a fuzzy future.  Their is a heavy focus on the timeless and continuing nature of the Mexican underclass, and a Nun who has visions of  the Virgin of Guadeloupe.  This religious theme is intermixed with the theme of a resurgent Mexico, that has taken the leap to a new interconnected, all-the-time ubber-internet.  Using the hyper coordination that these advances make possible, and the poor condition of its neighbors to the North and South, Mexico is rebuilding its Empire under the guise of modern day Aztecs.
There Is a very good interview of him at the Strange Horizons website.  I am quoting from part of one answer:
Interview : Barth Anderson
Darin C. Bradley, Strange Horizons, 1 May 2006
Patron Saint [has a]  radical dualism. In early drafts, it started with just a villain (who actually called himself "Virus") bent on toppling a government with his bio-engineered virus. I found the villain so interesting that it didn't even occur to me that I needed a hero, too. But once I realized this was a mystery in need of a sleuth, I decided to stick with this virus-as-metaphor angle and looked to the immune system for clues as to who the hero should be. So the hero is a well-intentioned, "good" scientist who's powerful in the sense that he's in charge of vast, global resources, but he has maddeningly huge blind spots, too. After that, I did my best to blur the lines in this Good vs. Evil trial—the hero and the reader will both be sympathetic to the villain's goal, I think, though his means are bloody, but I really did my best to keep it as a duel.
The author is a bit of a "lefty" at times, and it is obvious from the quote that he is trying to push a little of that agenda within this novel.  Fortunately for the novel, he either fails, or intentionally muddies his polemics to where they do not dominate the novel.
Although the reader will probably understand the villain's motivation, I seriously doubt many will sympathise with his cause.  The strategizing of the enemies of the Mexican regime  tend to make them a rather unsympathetic lot.  Lenins' aphorism: "In order to make an Omelet, you have to willing to break a few eggs" comes to mind.  As with Lenin, an awful lot of eggs get broken.
It is a little unfortunate that he brings in so many of the dangerous aspects of a fascist regime, but misses fascism's very dangerous populist appeal.  There is a very fine line between the ostentatiously right-wing fascists, and the left-wing Peronist style governments.  By missing the very dangerous advantages fascism as a controlling movement, he makes the fascist seem a little too tame, a little too removed,  a strong man government with a good Internet marketing agency.  They are not so much fascists, as technocratic plutocracy.

The positive point to all the politics is that it makes for a very subtle hot zone. Even in the midst of attempts to stop a truly horrific pandemic, many of the players are not about to drop their personal political agenda to further their cause. As the main heroic protagonist is American, the fractured remnants of which are at war "with Mexico, this makes for some rather difficult twists and turns.

While much of the time is spent in Mexico City, the Southwest United States, which has become an ongoing point of conflict, is not ignored.  It is described in a momentary reminiscence.


HD had grown up with a deep allegiance to his grandfather's cooperative farm and the people there.  It had created a hyper awareness in him, surrounded as he was by the strange array of people who were perpetually drawn to Nissevalle [Cooperative] Farm.  With US agriculture slowly starving for lack of oil even before gold mold destroyed it, many Midwestern cities had drained into rural communities in search of food and jobs during HD's childhood.  Nissevalle became a beacon not only for farmers who wanted to farm, but spoiled old-timers accustomed to a steady supply of food, avant-garde artists turned rural hayseeds, neo -Jeffersonians, intellectuals fleeing the sinking isle of America's collegiate class, urban Land Reformers, Australian war refugees who'd fled one frying pan only to land in another, disabled people whose government aid had evaporated, misfits, orphans, former dot-commies, and the unemployed mass that had been marching into the countryside for years.... (MPB p 252).

Mexico City is in better condition, but only in a dystopian big-brother sort of way.

What was is my opinion over all?  I enjoyed it very much. It is actually one of the most effective post-apocalyptic novels I have read.  It is effective because the characters are too busy trying to get along with their current activities to spend too much  time dwelling on the collapsed state of the world.  As is typical today, people worry about the poor, and destitute, but they spend most of their time worrying about their jobs.  What information dumps there are, tend to be about their current problems with the plague, and disease control in general.  They are trying to avoid further collapsing.

Just for me he put in some cyborgs, and one of them even has a gun attached to an AI, presumably a nod to the lead character of  Ken MacLeod's The Star Fraction.  The cyborgs don't dominate the action, because as in real life, cool tech is cool, but politics matter more.
For our descriptive (versus qualitative) descriptions of grittiness-realism, and readability (1 to 7 with 7 being high):

For grittiness will say that it hits the maximum at a  seven.  Unusually for a "science fiction" novel, I am not going to take off points for being speculative in nature. The future speculations are welded rather closely to the issues of today's world. That they occasionally fly around in hover-cars rather than helicopters is barely noticeable: it allows the in-transit dialog to be done at something less than a shout.  The Mexican resurgence is actually made much more plausible than I had thought was likely.  The author avoids the "everything back in order" epilogue that is so popular in pandemic collapse novels.  Some of the protagonists envision a better future for Mexico and the United States, but it is very easy to see the alternative: a rather nasty collapse in Mexico.


For readability I will give it a 5.  There is a fair amount of Spanish quips that while usually translated do slow up the flow of the novel.  To give the novel its Hot Zone feel, lengthy discussions of immunology and epidemiology are required.   Their is an attempt to bring in the Opera Don Quioti as a parallel theme to the story.  It doesn't work.  The shift from what to most people will an obscure musical format, to a gritty future reality is a stretch.  There are at least 21 retellings of the story as an opera in German alone, so I am not even sure which version is being discussed.  I think the author is trying to add to the duality within the book of what is spiritual and imagined, and the hard edged realities of science.  The novel is somewhat lengthy.

However, there is almost always something happening, either a puzzle they are trying to solve, a person that is at risk, or the menacing plottings of the bad guy.  So while I would not call it a pager turner, it is not a complete literary slog either.

The author needs to seriously stop playing around and write some more novels.
Posted by russell1200 at 5:00 AM

Holy crap I have wanted to read this.
I can appreciate that the cyborgs were added for you, but I believe you to be incorrect.. They were added for future me when I get to this myself

Future me and the author go waaaaaay back

I hope you go way back in a good way - not as bitter enemies.

The author seriously needs to stop playing around and write some more novels.

a statement like that would serve your review well.