I Spied A Pale Horse: A Review.

Mark Timlin's I Spied A Pale Horse is a fast paced pandemic apocalypse-in-progress tale set in England with the action starting in London, but than moving to the surrounding areas. 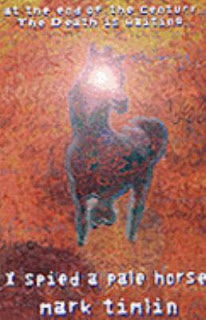 Mark Timlin is a colorful character.  Before he was an author, he was on the road crew (“a roadie”) for the musical groups “T-Rex” and “The Who”.  He is best known for his crime fiction novels, and in reading “Pale Horse” you can see some of that sort of urban tough-guy stylization. For reasons that are little unclear to me, he occasionally writes under other names: Tony Williams, Jim Ballantyne, Martin Milk, and Lee Martin.  He noted at the very end of an interview that he had a sequel in mind for I Spied a Pale Horse - but to my knowledge it has never been written.
It shares a fast paced gritty English urbanism and collapse, of Scarrow’s Last Light. As I noted above, the author writes a lot of crime fiction.  Crime fiction tends to have a lot of semi-bad guys for good guys, and they are ever ready with the quick wise-crack, and fast moves.  That is what you have here, but in a post apocalyptic setting.  It is a mash-up of Robert B. Parker’s Spencer For Hire with The Road Warrior: and very intentionally so.  Our hero's enter the saloon:
Jesus, it was like some comic book version of the end of the world.  Like by the geezer who did those Batman graphic novels in the eighties.  And he’s been right in his vision of the apocalypse. There are dustbowl cowboys, Goths, punks, new romantics, grunge kings and queens, junkie scarecrows, bodybuilding freaks, the full nine yard.  And if I’d still been a copper I’d’ve busted them all in a second (PB 79).
There is even a dwarf bad guy.

It's all good fun.  Lots of combat, neither the long winded survivalist lessons, nor the political ranting of militia-themed novels.  Not a lot of actual starving.  The bad guys are pretty despicable, but because so many people died, there are supplies on hand.  If the Brits weren't so enthusiastic about turning rouge in these post-apocalyptic settings, it wouldn't be such a bad life.   That must be what happens when you have your natural firearm inclinations suppressed for so long: five minutes after the pandemic plague hits, or the grass dies, or the carnivorous plants get loose, it all goes to hell in a handbasket.  And in this novels, our heroes are some of the bandits!  They just happen to be bandits with a heart of gold (or maybe plated tin).
I am curious as to weather the British have a different nomenclature that they use with their weapons.  Submachine guns are machine guns (implying a much larger weapon), magazines are clips, bolts are levers, etc.  The author doesn't seem to have realized that with military firearms would come military night vision gear.  I get the sense that this British author, writing in pre-apocalyptic U.K. urban settings has not had much opportunity to really let loose with the novelistic heavy firepower.
For our descriptive (not qualitative) ratings (1 to 7: with being high):
Realism (a.k.a. grittiness):  It is about as unrealistic as a shoot-em-up can get.  The world has all these dangerous people, but our "heroes" seem to be able to drive around all over the place.   Granted that anytime our heroes are on the move, there is one less group of bandits lying in wait - themselves - it still is strikingly easy - and peoples reaction to the violence is to start clearing the roads, so that our bandit heroes can get around with even greater facility (?).
It is one of those stories where the little survival group has all the needed skills combat skills to take on a squad of U.S. Marines: multiple times.  When people are shot they die very quickly.  This makes it much easier for outnumbered heroes with surprise to take on numbers much greater than themselves- being regularly outgunned, and outnumbered by more than 2-1: dream on.  But a lot of good guys die.  Bad things do happen to those who live by the sword, so it is not completely a starry eyed fantasy.  They worry just a little about the siting and supply of their home base.  Outside of the disease itself, there is nothing speculative about the science, and the primary biblical allusions are the title of the book.  Nobody gets raptured here.  So I am going to take the easy route and put it in the dead middle of  4.
Readability is easy.  It is a page turner with short chapters.  There is one slow meandering section where the group gets all cuddly and homey, before the next waver of (telegraphed) violence occurs.  If there had been a little better misdirection here, the lull might not have been so tedious.  So rather than give a pure page turners 7, I will drop it back to a 6.  Still a very fast, easy read.
Posted by russell1200 at 5:00 AM