B.A. Shield's Pandemic Dawn is an apocalypse-in-progress set within a slightly futuristic American setting.  The primary agent of collapse is a zombie-flue, but it has an everything-but-the-kitchen-sink approach with tactical nukes, EMPs, hints pre-story economic collapse, and even a little bit of militia-style paranoia.  At least some of the chapters are on line:  they have some nice pictures of ruins.   There is also a 2-1/2 minute trailer (video link). 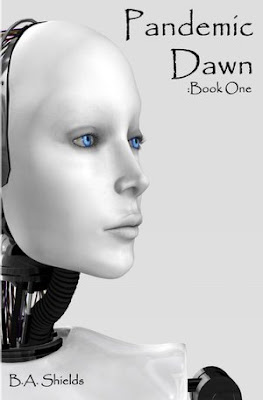 B.A. Shields is a native of Michigan.  He as a background in computer programing and logic, and robotics.  He is a pastor for a small baptist church in Northern Michigan.  A number of his sermon notes can be found here.  He advertises what appears to be Christian Fundamentalist work at the back of the book so he is not keeping his affiliations a secret.   His purpose  in writing  the book is commented on in his Website biography:

I began writing Pandemic Dawn in 2009 as a result of the continuing concerns I witnessed among people in general over the spread of yet another infectious disease, the “swine flu” or H1N1.

I still remember when AIDS first started destroying peoples lives, and the fears that came before and after they discovered how it was spreading, and just how deadly it really was.

As I alluded to at the top, Pandemic Dawn is a bit of a mashup.  You have bits and pieces from a whole host of fictional dystopian or cataclysmic scenarios within the genre.   Oddly enough, it works better than one would think.  There are zombies of a sort, but they are generally less dangerous than people. They remind me more of the random encounters that you would run into when playing Dungeons and Dragons. There is a side story of an emergent artificial intelligence (AI) humanoid robot that is done well - the break in the action between the story lines are smooth.  Oddly enough, even the virus itself is not as much an issue of personal survival as would be expected in a pandemic.  The dangers of the collapsed world are more immediate.
The book is not too particularly preachy.  Although I found many of the villains to be rather cardboard-like,  there is greater exploration of their evil motivations than in many books of the genre.  The good guys are not overly heroic.  They are somewhat normal people who have rallied to helping their fellow humans.   The author tends to weigh the mix a bit toward the outright evil folks, but there is a mix of the good and bad.  Not everybody is awful.

There is an excellent portrayal of the confused interpersonal interactions found within a group of normal people thrown together in a difficult situation. Some adapt better than others. Where people have made advanced preparations, those preparations are helpful. The people who make these preparations are not portrayed as selfish misanthropes. A twist, that I find plausible - if not fully explained - is that the built up urban areas are safer than the surrounding suburbs. The spread out nature of the suburbs spreads out the defenses (presumably gun-wielding home owners), while the bad guys can organize and concentrate their forces at the point of engagement.


I did like the book.  Militia-paranoia is not my favorite apocalyptic theme, but it works reasonably well here.  The toned down nature of the fantastical elements (zombies and AI) keeps the novel somewhat grounded.  It is just shy of being a page turner through some of its middle sections.  Exciting, but there is a little time spent filling out the details.  The novel does end on an extended fade.  The ending is more of a setup for the next book in the series, than a dramatic conclusion in its own right.

It appears to be intended for a multi-book format from the start, with the story segments broken into manageable length pieces.  It can be very hard to line up the story breaks, with the breaks in physical product (see Lord of the Rings) when you do this.  Anyone who has worked their whole way through one of the rambling online derived novels (Lights Out) can see that there are some advantages to this approach, but it will raise the cost of the entire story, and risk losing  its audience at each break in the story.


Now to our two descriptive (versus qualitative) assessments:  realism and readability (1 to 7 with 7 being high).


Realism is a tough call. Zombies are not particularly realistic, even flu-zombies. However, there are a number elements of realism that are very strongly portrayed. The small group scavenges, the geography is squeezed down to a tiny area as they have to walk everywhere. The battle tactics are almost non-existence, but that probably is realistic: no Navy SEALs to be found either with the good guys or the bad.


Realism does not include the cause of the calamity unless the effect is overly continuous. In other words, if you have a meteor slamming into the moon, but the effect is otherwise similar to other disasters (nuclear war, volcanic eruption) we don’t worry too much about the likelihood of the event.  However, here, the very nature of the virus is on going and continuous.  Beside the very odd notion that a non-airborne agent spreads so rabidly that the government feels compelled to nuke its own citizens, you have the metamorphing aspects of the virus.  People are turning into zombies, and werewolf-type creatures.  Rats with no food source become some sort of oversized were-rats.  There is some scientific mumbo jumbo, about as valid as the Professor’s on Gilligan’s , but after a while it tends to wear down on the story’s “reality.”  The fictional world loses its connectivity with our world, and becomes escapism.  Adding in the speculative science fiction parts of the story (AI androids) and you have a very heavy counter balance to the more realistic elements of foraging, and chaotic attempts at group cohesion.  I will say that it is a three – one point below the mid-line.
Readability is essentially a rating of the directness and accessible the text.  The book is an easy read.  The science is mostly science-lite, the novel is short.  I am tempted to take off a point for the incompleteness of the story line, but the multi-part nature of the tale is made fairly clear, so I think that would be unfair.  As I noted it is a fast read.  Close to a page turner.  The scene changes are handled well.  I am going to say that it is well above average at a 6.
Posted by russell1200 at 5:00 AM