A Neccessary End: A Review

F. Paul Wilson and Sarah Pinboroughs' A Necessary Evil is pretty much along the lines of most pandemic apocalypses set in England, except that it is an auto immune reaction to biting flies that is killing everyone off. 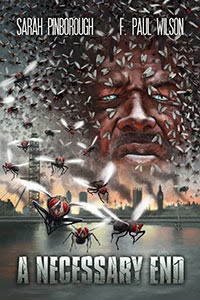 Sarah Pinborough is a prolific horror writer.  F. Paul Wilson he is well known for both his horror writing and his science fiction.  His most famous current works are the Repairman Jack series.
The title comes from a line in Shakespeare's Julius Caesar...

Seeing that death, a necessary end,
Will come when it will come.

...which is given to us in the front piece of the novel: thus setting the stage.
The official story blurb goes:

It spreads like a plague but it’s not a disease. Medical science is helpless against the deadly autoimmune reaction caused by the bite of the swarming African flies. Billions are dead, more are dying. Across the world, governments are falling, civilization is crumbling, and everywhere those still alive fear the death carried in the skies.

The death comes a few days after the bite, with the victim drifting off into a peaceful sleep.  I presume the idea for the disease was taken from the African Sleeping Sickness that is transmitted through the bite of the tsetse fly .
The story follows a newspaper reporter and his wife as he is returning from Africa on a pandemic inspired fact finding mission. The wife, prior to the outbreak, has already been diagnosed with cancer.  There is a lot of tension between the two as, his wife has turned to religion to find solace and purpose in her life.
The novel has elements of horror to it.  But I didn't find the biting flies to be all that particularly creepy.  The crazies who would help the flies jump oceans by transporting them to new locations as part of God's work were a little creepy, but since the flies seemed to need no help, somewhat superfluous.  Unlike many writers of non-supernatural apocalypses, the nature of religion is not ignored here.  But for the most part, the religious seem to come across as idiots.   One of the side effects of the disease is that people see a light coming toward them as they slowly drift off into death, and there is much discussion of this illusory effect.
A plague of deadly biting flies, that only come out in the day time, would certainly kill a lot of people.  But how it is that so many people are so incompetent at protecting themselves, is a bit odd.  I thought the story was going to take the route of society collapsing because of the secondary effect of everyone hiding out in the day so that the economy crashed, and it did seem to be going there. But the flies were faster, much faster.  So you don't get much in the way survivalist type action.
So did I like it?  It was all right.  It read very quickly, and the story line moved forward most of the time.  But by the end, a lot of the activities and adventures just seemed like a waste of time.  I guess the point was to illustrate the differing reactions (show not tell so to speak) of folks as everything came unraveled, but I don't think the choice of the reporter and his wife worked very well.  They were both sort of annoying, and ineffectual, and didn't strike me as particularly good conduits for lessons on the philosophy of reality.  I would give it a qualified recommendation.
We now come to our two descriptive (not qualitative) ratings: 1 to 7 with 4 the mid-point and 7 high. Realism does not include the cause of the collapse or apocalypse, but is otherwise an assessment of how close to today's world is the setting. Could you imagine your friends, or families living through the situation. Readability is not literary merits, but literally how quick and painless of a read.
It is set in the modern world.  As with most pandemic style novels, the die off is way to fast.  But beyond that it is hard to fault its realism.  It is intended to be an updated Lovecraft: science fiction-horror within a contemporary setting, and succeeds at that level.  It is a seven.
It is an easy read.  Not quite a page turner, and the naval gazing does slow up the story a little bit, so we will call it a six.

Wilson also did "An Enemy Of The State" which is in the top five best libertarian books of all time after The Probability Broach.

James: Either author could have had an interesting post just on their bio. I didn't see a huge political issue in this one, so I didn't bring it up.

I hadn't spouted off here for awhile. It was the best I could come up with :)