The King of Clayfield: A Review

Shane Gregory's The King of Clayfield (Goodreads) is a zombie apocalypse tale that starts of in a small town in Kentucky.  It uses the fairly common zombie-flu to cause a quick and chaotic end to life as we know it.  I believe this is at least a trilogy, and book two is already out.  My "reading" of the novel consisted of listening to the audio version. 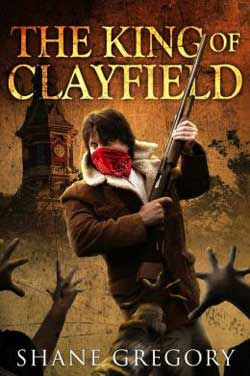 Shane Gregory (1971-) grew up in rural Western Kentucky.  He graduated from Murray State University with Bachelors Degree in Fine Arts in 1996, and is now the director of a nonprofit art center (Mayfield/Graves County Art Guild) at the historic Ice House Building. He enjoys painting, running, reading, and writing. He, his wife, and two children live in rural Kentucky with a garden, a few chickens, a dog, and a cat.  This is his first novel, although a sequel has been released. On his facebook page, the author notes that Mayfield is the inspiration for Clayfield with presumably the Ice House Building being were the action starts.

On a cold February day in the small town of Clayfield, Kentucky, an unsuspecting and unprepared [and occasionally wimpy] museum director finds himself in the middle of hell on earth. A pandemic is spreading around the globe, and it's turning most of the residents of Clayfield into murderous zombies. Having no safe haven to which he can flee, the director decides to stick it out near his hometown and wait for the government to send help.

I say wimpy because he won't do things like run over six-year old boys who have turned into zombies, and generally feels sorry for the ex-people.  The zombies are dangerous because of their infection, but are not a match for a person one-on-one.  However there are a lot of them.

The start of the novel doesn't feel all that much different than the many "realistic" apocalyptic novels, where people somehow know that all is lost, and immediately start battling each other 5-minutes into the "event" (EMP, plague, or economic collapse).  At least with zombies it seems more realistic: no reason to ponder what all the fighting is all about.

The story has lots of activity.   A lot of it is somewhat along the lines of a more typical "prepper" (a.k.a. survivalist) style story.

The comment is made that the people who survived were the smart ones (the prepared) and the lucky.  The little group that forms realizes that it has been lucky, and goes about some after the fact preparing.  The zombies are difficult, but for the most part can be dealt with.  Thus, you have a lot of talking about what the ideal survival setup might be.  One house has a wind turbine, but they realize that it would be too much of a target once "regular", but not very nice, folks make an appearance.  There are definitely folks who are nicer than others, but there is a more realistic continuum of types.  There are bad guys who aren't 100% cold-blooded killers, and good guys who are dangerous because of their ineptitude.  And folks who shade into an uncomfortable gray area.

So did I like the book? Yes I did.  The author is generally good at the action scenes, which is unusual enough in itself, but also is very good at bringing all of the characters, good, bad, and even some of the zombies (sort of) to life.  The author has a better than average understanding of the weaponry, but doesn't over do it: particularly as the main character does not have this level of understanding.  In the short term survival world, rifles and ammo prevail.  They are not hard to find, and smokeless gunpowder being the equalizer it is, and there not being a super abundance of NAVY SEALs, rangers, and ex-military types sometimes found in our post apocalyptic world, women are just as capable or incapable as the case may be, as the men of holding their own. There is even some funny moments when the women demand to be treated as equals, but still want the guy to go out and do the "fixing" when its dark and cold outside:  the obvious is not ignored.  Because our hero doesn't make too big of an issue of it, our hero does pretty well attracting women.
Since, this was an audio book, I will note that the narration was generally well done, although the male narrator was not always entirely convincing with the female version of Southern speech patterns.  I generally don't notice Southern dialect much, as I am rather used to it, and I noticed it here with the women.
We now come to our two descriptive (not qualitative) ratings: 1 to 7 with 4 the mid-point and 7 high.  Realism does not include the cause of the collapse or apocalypse, but is otherwise an assessment of how close to today's world is the setting.  Could you imagine your friends, or families living through the situation.  Readability is not literary merits, but literally how quick and painless of a read.
Realism is fairly straightforward.  It is a very realistic novel: except for the zombies.  Although I don't normally take off for the cause of the collapse, I do when it has a continuous effect on the story.  There is a fair amount of mystery and suspense as to what makes the zombies tick and while it is interesting, you wouldn't call it "real".   The time frame is relatively short, and with the action starting some time after Christmas, there is a lot of concern about cold weather, and supplies.  It is a 5.
Readability is easy. It is a page turner in many locations, and the audio presentation probably actually slows you up at times.  There is some discussion of philosophy, and the greater scheme of life in general, but there is not much in the way of deep symbolism to be puzzled through.  It is a 7.

Well if you said you liked it it's on my list :)

Pioneer: From an entertainment point of view certainly. From a prepper's point of view it does a pretty good job of discussing supplies, and the disadvantages of psychotic behavior- but it is a zombie book.

You might qualify for a new government sponsored solar program.
Determine if you qualify now!