A Departure: A Review

Tom Ward's A Departure (Amazon, Amazon.uk) is an apocalyptic novel set in the immediate aftermath of a celestial event wiping out over 2/3rds of humanity.   The exact cause, and the extant of the death-event is never completely puzzled out, but it struck me as almost a Darwin's Radio meets death-ray event because survival seemed to cluster within families. 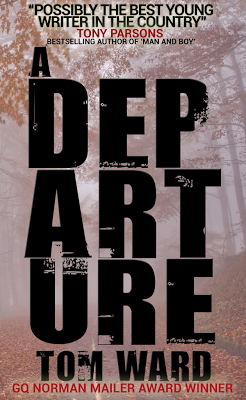 Tom Ward (per his Amazon bio) is a 23 year-old British writer and winner of the 2012 GQ Norman Mailer Student Writing Award.  He writes for Huffington Post and Sabotage Times.  Released by the small press Crooked Cat Publishing of the U.K., this is his first novel.

The novel starts off very shortly after the fast acting, death dealing cosmic event.  It appears to have been a one time event, or at least occurring over a very short period of time.  Society is immediately disrupted in the ensuing panic and basic services fall apart.  While it is not as extreme as some others of the type, the author seems to be in common with many other British apocalyptic writers in presuming that a significant number of people will lose their cool, and become deadly sociopaths within hours, if not minutes of the event.

Our narrative view point (with a couple of odd momentary switches) is Michael, an 18 year old boy who has lost his family, and decides to set off for France under some vague sort of idea of finding his girlfriend.  In a very nice touch, he stops off at his Grandfather's (Grandma died in "the event") and they have a last parting.  His Grandfather, knowing his time his short, and unwilling to travel, packs him up with some supplies, and sends him off.

Michael precedes to wander down from somewhere around Hull (to an American's way of looking at it about half-way down their European-side coast from Scotland, south to London, picking up, and losing a variety of people as he moves along.   Issues of mental health are often at the fore-front of the story, and a lot of the misbehavior seems to stem from people coming loose from their moorings.   The group is in a bit of a haze, which is apparently why they don't pick up any of the nice weaponry (British style SA80 bullpup assault rifles) weaponry at times. I didn't keep close track of the passage of time, but most of the story seems to be occurring within about a 2 week period, and enough people have collapsed into instant corpse-dom, that scavenging is not much of a problem.

One odd item, the author is young, and the narrative point of view is primarily from an 18-year olds point of view.  Characters who are older than 40 are generally viewed as doddering old timers, from which little can be expected.  The older woman, who eventually comes into the story, is 21.  It is a little like reading some of the science fiction of the 1960s or 1970s when a lot of writers were young, and exciting things could happen to youngsters.  Apparently the young author is not aware that 40 is the new 30, and all that.  He has a thin, and presumably healthy lady of 48 act as if she was a spinster.
Which also brings along the almost extreme binary nature of the people we meet along the way.  They are either completely level headed, competent people (rare), or complete incompetent, and often half insane on top of it.   The few people that are clearly bad guys, generally wind up being out of control incompetents.  Michael, an 18 year old prone to queasiness at the site of blood, is able to more than adequately defend himself with a largish kitchen knife.
Did I like the story?  Yes, overall I did.  It is a little uneven at times, with author switching from loose descriptive styling, to an almost poetic rendering.  The story doesn't have a whole lot of point to it other than wandering around in bedlam, but the odd cast of characters thrown together, makes it an interesting ramble through the back roads of England.  It's not a "must read" , but I think is worthy of a qualified recommendation.
We now come to our two descriptive (not qualitative) ratings: 1 to 7 with 4 the mid-point and 7 high.  Realism does not include the cause of the collapse or apocalypse, but is otherwise an assessment of how close to today's world is the setting.  Could you imagine your friends, or families living through the situation.  Readability is not literary merits, but literally how quick and painless of a read.
Realism is not all that straightforward here.  Normally a novel in the here-and-now with a mostly action based pacing would be viewed as being highly realistic:  particularly as we don't usually count the plausibility of the crises.  The fact that people are losing their moorings, and going a little crazy is also a plus.  But there is just a little too much convenience in their escapades.  Too many usable cars with fuel and keys handy, too many (very) easily scavenged supplies left behind in grocery stores.  Too much a lack of people around when it is convenient to the author's plot line.  Granted, all of these failings are common to the genre, but issues of travel and supply come awfully close to pushing this novel into the front end of a cosy (by original definition) with lots of fast cars and freedom to go with your collapse:  its a 5.
Readability is more straight forward.  There are a few confusing dream sequences and some of the point of view shifting can be jarring, but there is no magical realism, and no obvious opaque psychology to confuse issues.  It reads quickly:  a non-literary 6.
Posted by russell1200 at 7:00 AM

Sounds like the author is suffering from permanent Liberal headed syndrome and a lack of reality gene. I hear it is common in those from Europe (especially France and England) and the North Eastern US.

Pioneer: He certainly is not an American style conservative. But liberal-headed I think is too strong. It seems more like just generally fuzzy-headed mass culture rather than being particularly polemic.