The Last Man Standing: A Review

Davide Longo's The Last Man Standing (translation by Silvester Mazzarella) (Amazon U.K.) is a slow-burn apocalypse-in-progress set in Northern Italy somewhere around 2025.  At the start of the story we are seeing a general economic collapse, that reads like a slightly more extreme version of what is going on in Greece today.  Month by month the situation becomes far more serious. 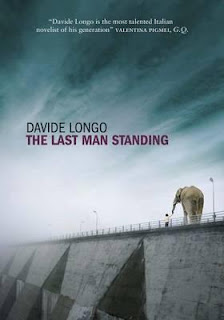 Davide Longo (bio from here) was born in Carmognola, Italy (1971),  graduated with
honours in Language and Literature (majoring in Cinematography) and attended the Masters Course for narrative technique at the Holden School of Turin where he graduated winning a Scholarship for
Merit. Since 1999 he has been a teacher at Holden School of Turin (the famous Baricco school).

In 2001 his historical novel Un Mattino a Irgalem was published by Marcos y Marcos, winning the Premio Grinzane for best first novel and the Via Po Award.Longo's second novel Il Mangiatore di Pietre received wonderful critical acclaim and won the Premio Città di Bergamo and the Premio Viadana.  Besides novels, Longo writes books for children, short stories and articles and his texts are also used in musical and theatre productions. writes a variety of articles for publication, children's books, and novels.  The Last Man Standing is his third novel for adults.
The story starts off with a disgraced author-professor, who has returned to his childhood home (unnamed) after a scandal with a young student, on an excursion to collect up some valuable olive oil from a nearby city.  Travel is getting difficult, and the rule of law is breaking down in degrees, if not completely collapsing just yet.  Currency is holding is still holding some of its value.

What makes this novel exceptional is the way that it takes you step by step through a very slow, but none-the-less very complete, collapse.  The narrative viewpoint is strictly through the eyes of the disgraced author.  Although his situation in the countryside is not too bad at first, small troubles start turning into larger troubles.  As our "hero" takes various courses of action, they are sometimes successful.  But when you have to roll-the-dice for too many successes in a row, the inevitable mistakes are made.  Sometimes, it is innocent or helpful strangers who pay the price, sometimes it is his loved one.  The book does an excellent job of portraying the lack reliable information, the uneveness of the setting, the highly variable reactions of otherwise civilized people.

The time frame does not move far enough into the future, and the causes of the collapse are not so severe as to become like McCarthey's The Road, but there is some of that flavor at the end.  The Road, but with a twist.  Relatively late in the book, while taken captive by some feral youths, he is thrown into a wagon-jail cell.  A jail cell that happens to be a circus wagon, and that he is sharing with the slightly worn, and battered, but still very much alive elephant.  Although the elephant is very much out of place in a collapsed Italy, it does have the advantage that it can eat unprocessed greenery.  He and the elephant eventually continue on their way with the various crew of family and friends that have clung together in desperation.

Even with the whimsy, and symbolism, of the elephant, the author is far more thoughtful about what happens in a collapse than most.  Gangs of youths, and gangs of ex-military men, are a severe problem.  As time goes on, even the military units that try and hold together run out of food and fuel and melt away.  The violent gangs prey on those who cannot muster sufficient defenses, but it is lifestyle with a relatively short expiration date.  Most towns become ruins, but a handful, particularly those with old fortifications, are able to barricade themselves, and apparently grow enough food, to keep themselves a going concern.  The collapse is complete, but it is obvious that it will not be eternal.

I enjoyed the book very much.  Within the very narrow category of realistic apocalypse-in-progress, it has few rivals for literary merit.  I have never made a top ten, or top five type list for the type, but I would certainly consider including it in that category.

We come to our two descriptive ratings: Realism and Readability: 1 to 7; 4 is the mid-point, 7 is high.

Realism is fairly easy.  It starts out at the incredibly mundane level.  A disgraced writer-professor, trying to scrounge up some increasingly difficult food commodities for the village he lives in, and slowly unwinds from there.  It pays closer attention to the logistics, and problems of countryside survival in a collapse than is typically seen.   It is a 7.

Readability is also fairly straightforward.  The language and writing style (via translation) are excellent.  It is not a page turner, and with an author as the protagonist there is some navel gazing, but it does move along fairly well.  It is a literary 6.

Thanks, great review. Its on my list as if I need another book...

You do fine work, my friend.

Ya this one sounds like one I need to get.

Steven: We all need more books. If you get the old fashioned wood pulp version, you can use it as a source of fuel for cooking.

Pioneer: Yes, the number of good slow burn, slow apocalypse books out there are very small. Oddly enough, left-leaning authors seem more inclined to that style. This one is relatively unpolitical from an Americans point of view.